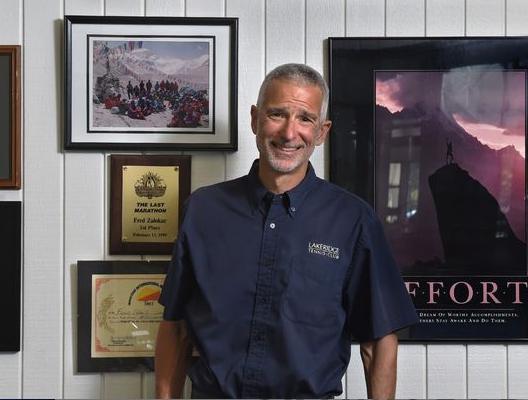 Last summer, Fred Zalokar and his wife, Deb, visited Namibia, an African country known for its Skeleton Coast, crumbling shipwrecks and gigantic sand dunes. It is one of 121 countries the Reno resident has visited.

Of those 121 countries, Zalokar has climbed the highest peak of 63 of them, so checking the top of Brandberg Mountain off the list was a must. Zalokar grabbed a guide and set out for the peak. But the 56-year-old Zalokar doesn’t hike mountains. He runs them, usually leaving his guide in the dust. Starting at sea level, Zalokar ascended the 8,550-foot peak and returned to his hotel, a good day of hiking completed.

“The next day, we were at the Hilton and my wife walks over and says, ‘You’re not going to believe this,’” Zalokar said from his office at Lakeridge Tennis Club. “She pulls out their national paper and who’s on the front page but me. It basically said, ‘American comes and breaks the record.’ And I just wanted to climb the mountain.”

Murray: Reno’s fastest man has unique soul
Unknowingly, Zalokar set a record for fastest ascension of Brandberg Mountain, completing it in 8 hours, 6 minutes (he could have done it quicker had he known a record was at stake). Still, a picture of Zalokar and his guide was right there on the front page of Republikein, Namibia’s top newspaper, the following day.

“It was the funniest thing,” Zalokar said with a laugh.

It also was typical of Zalokar, a man as well-traveled as you can be and a man who is crushing the record books with every run. A mountain climber by nature who eventually got into ultramarathons, Zalokar turned to regular marathons (26.2 miles) in 2010. Since then, he’s won five of the six World Marathon Majors for his age group. In February, he could become the first person to complete a career slam.

“In a word, it’s otherworldly,” said Michael Connors, a longtime area runner and de facto local running historian. “To run like he does consistently and to put in the sheer amount of training that he does is so impressive, and to know what a humble person he is and how grounded he is, if you talk to any runner about him they’ll tell you how good of a person he is. Any accolades that he gets are well earned.”

Photo rewind: Action at the 2015 Reno-Tahoe Odyssey
Perhaps the most incredible thing about Zalokar is he didn’t even take marathons seriously until age 50.

Born in Ohio, he moved around a lot as a child, making stops in upstate New York, New Jersey and Southern California before graduating high school in Tulsa. He was mostly a football player as a kid, hitting 6 feet in the eighth grade before stagnating at that mark. Checking in north of 200 pounds, Zalokar was a fullback who spent more time in a weight room than he did running laps, although he always loved to run.

“Back in those days, we all wanted to be Arnold Schwarzenegger,” said Zalokar, a child of the 1970s.

After getting an accounting degree from University of Oklahoma, he moved to San Francisco following graduation and two years later relocated to Reno in 1984 because of his love of the mountains.

“I wanted to get up in the mountains and I really liked Lake Tahoe and Reno was the biggest population that was close,” he said. “I just thought I’d be up here a little while and check it out and I fell in love with the area.” Read Full Article