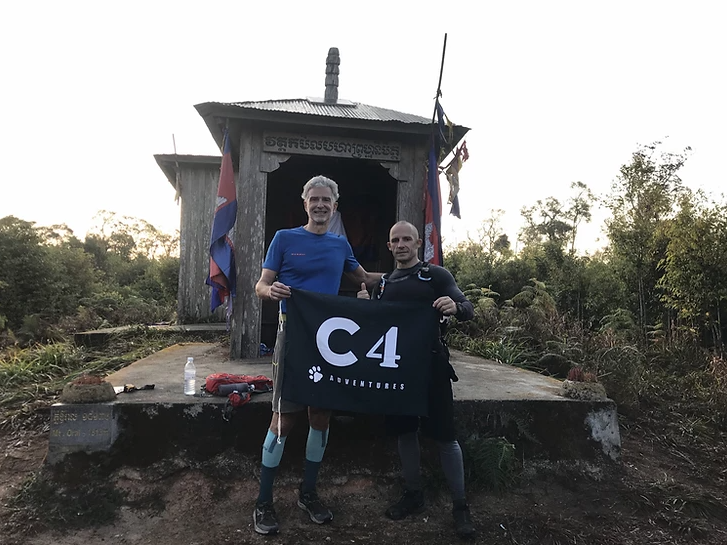 The fastest known ascent of Cambodia’s highest peak (1813m) has been recorded in the early hours of Monday morning: 3 hours and 27 minutes. Fred Zalokar 59 years old and David Minetti 42 years old ascended via the main Aural trail in a single climb. They left the village around 1.45AM to reach the established base camp (elevation 225m) around 3AM on Monday, February 17, and summited around 6.30AM on the same day. The evolution of the ascent was monitored by Jean-Benoît Lasselin and his team with a first check point at 1200m and a second at the summit to record the exact time of arrival.

Fred and David said they felt good all the way. Due to the sudden elevation the terrain, the team decided to start walking from the village of Aural for 8 km in order to warm up properly and start the ascent in the best conditions after a quick stop at the established base camp. “From this point, we did not stop. We went all the way to the top, and back” comments David Minetti.

Several speed records have been claimed on Aural but C4 Adventures, the organiser of this ascent, established the first fastest recorded time. “Overall, from the Aural village, David and Fred did a round trip of 7 hours 46 minutes 14 seconds and had an elevation gain of 2024 meters in total” concludes Jean-Benoît Lasselin.

The Aural mountain attracts every year more adventurers and trekkers as it is one of the toughest trail the climber will face with an average 50% inclination rate, including some 80% sections, a slippery terrain as the humidity level reaches 80% and an oppressive heat, from 36 degrees Celsius at the mountain feet temperature to 26 degrees Celsius at the summit).