I had climbed six of the Seven Summits—the high points of the seven continents—and had summited five of them. At this point, it became clear to me that climbing Mt Vinson, the high point of Antarctica, was not going to be economically viable, particularly with respect to the relative ease of the climb. When I heard about the Antarctica Marathon, I thought, “Hey, I could do that”. At the time, the race was a significantly more affordable travel option than other ways of getting to Antarctica. I was eager to travel to Antarctica, because it was the only continent that I had not yet visited. Running a marathon seemed like a good way to go to Antarctica with a purpose, rather than just visiting as a tourist. In 1998, there was no waiting list and I signed up for the 1999 race with a group called Marathon Tours.

We all met in Buenos Aires on February 7, 1999. A big group of us went for a shakeout run. Towards end of the run it started pouring rain and the streets filled up with nearly a foot of water. It was amazing how fast the water rose. The next day we flew to Ushuaia, the world’s southernmost city. Ushuaia is known as “The End of the World”. It definitely felt that way. We went to the end of the Pan-American Highway in the southern part of Patagonia. It certainly was desolate. 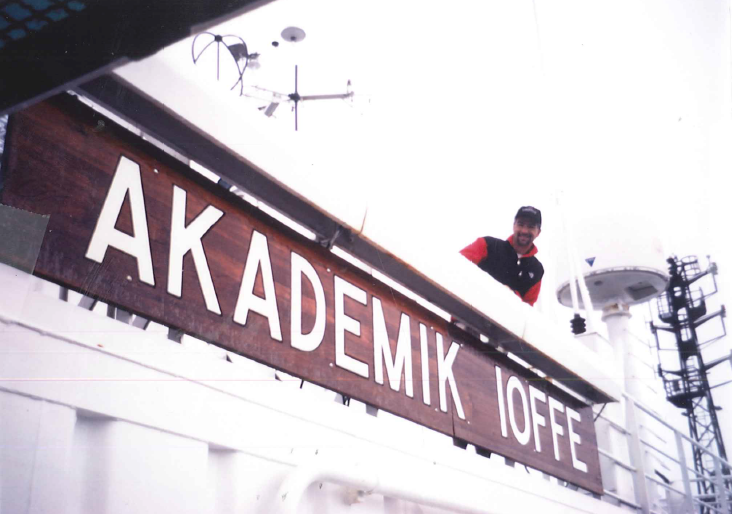 We spent one night in Ushuaia. The next day we boarded the “Akademik Ioffe” with its Russian crew. It is a two-day journey from Ushuaia to King George Island, where the race was going to be held. The journey was uneventful, except for the crossing of the Drake Passage. Almost everyone got sick and there was a lot of vomiting. I remember a female Russian crewmember walking down the swaying hallway with a bucket and mop to clean up the messes. The ship smelled pretty awful, too. It took 18 to 24 hours for most people to stabilize and feel better. Even I felt nauseous for about 12 hours. I took some Tylenol and spent a lot of time lying down. 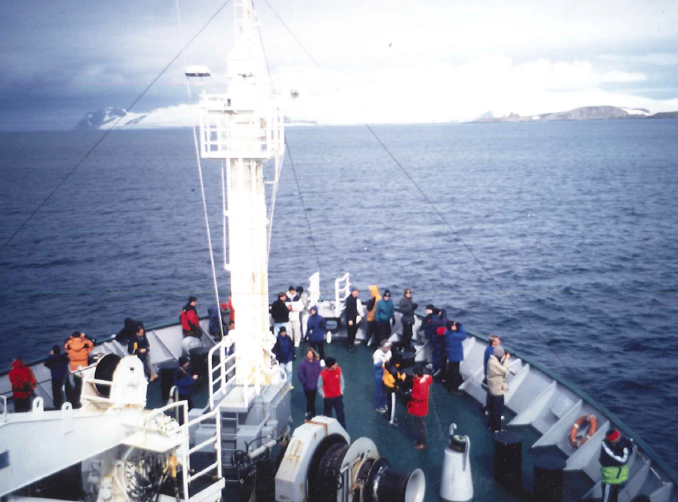 After we all survived that, everyone came back to life and started to hang out together. It was a fun, good group of people. There were about 100 people on our ship, nearly all of them running either the half or full marathon. There were a few non-running spouses who were there for the vacation aspect of the trip only. Everyone got along. There was also another, smaller ship carrying more runners. Even though I had always run, I was mainly a climber and an ultra runner. Because of that, I thought that I would be able to fly under the radar, but there were a couple of guys from Arizona on the ship. They asked me, “Didn’t you win last year’s Crown King 50K?” I said, “Yes, that was me”. After that, I started getting more attention than I had wanted, or expected, and suddenly I was one of the favorites to win the race.

The ship was our hotel and restaurant for the entire trip. We arrived at King George Island, and dropped off a group of people whose job it was to set the course for the race. The rest of us went off sightseeing. We sailed through the Antarctic Sound to Paulette Island. The icebergs were massive, plentiful, and thoroughly amazing. The water was bluer than blue. Landing on Paulette Island was like stepping back in time. There were whale skeletons with enormous bones piled & scattered on the beaches, quite a few seals of all sizes lying around, and thousands and thousands of penguins. The penguins weren’t afraid of us, and we walked through crowds of them (and their pink penguin poop!) When we left, there were minke whales swimming very close to our Zodiacs, at times even bumping the bottoms of the boats. It was pretty cool! 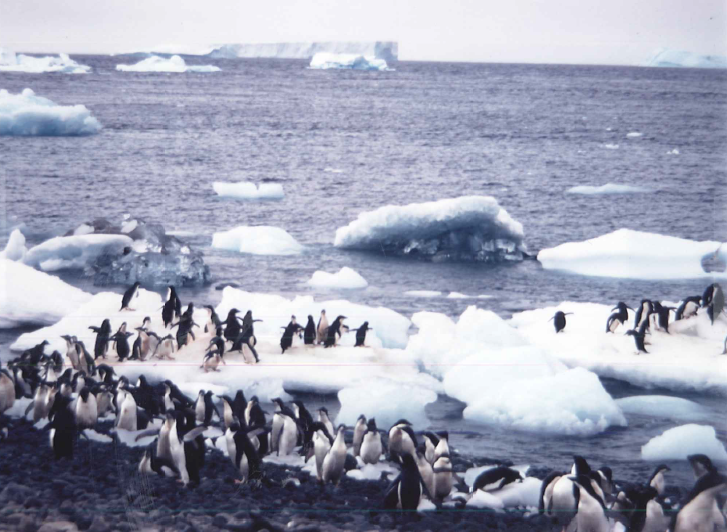 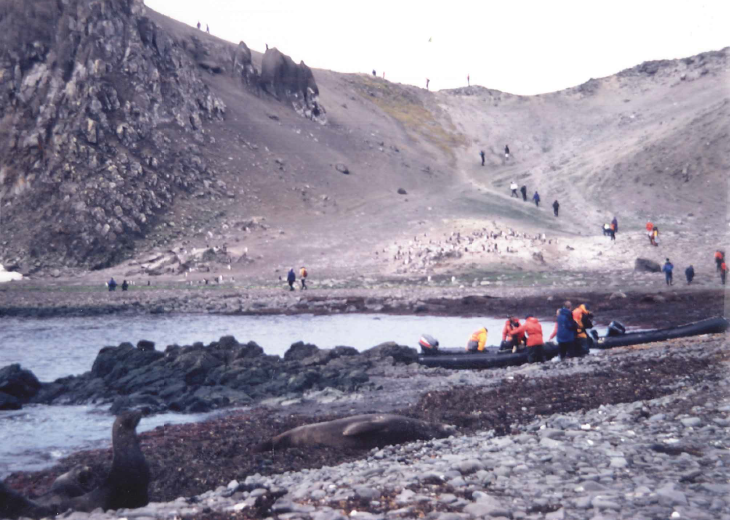 The wildest of the wildlife were the leopard seals and the skuas. A skua is like a seagull on steroids. More than once, I watched a group of 5 or 6 skuas surround a small penguin and rip it apart for food. One unfortunate penguin was alone on a small piece of ice with a leopard seal circling it. None of these scenarios ended well for the penguins. It was a chance to watch the circle of life at its most raw.

Eventually, we headed back to King George Island. The group that set up the course also returned to the ship. At dinner that night, we had a course briefing. The marathon course started and ended at the Uruguayan base, running two loops of a half marathon course. We would start running in one direction, go up a snow hill and turn around, then head back to, and through the Uruguayan base, running another out and back with 10+ miles to go for the first half. That part of the course passed the Russian and Chinese bases along the way. Bart Yasso helped set the course and was really most people’s favorite to win. At dinner that night, Bart was talking like he wasn’t sure if he was running the half of the full, even though the race was the next morning. My strategy was to run with the leader for the first half, and then to pick up the pace and finish with a win.

The next morning was race day. It took some time to get everyone onto the island. The weather wasn’t too bad, and since I train in Reno winters, I felt right at home! The temperature was above freezing, in the high 30s. The race started. From the outset, it was clear that Bart was going to lead. My thought was to push him by staying with him. We ran together. At the half, we were still running together. Bart stopped at the half and won the half marathon. I was by myself, but I knew the course. I had run the first half harder than I had planned to, so I was hurting a little. Bart’s friend Steve caught me at around mile 21 and passed me.

By this time, Bart and the others were on 4-wheelers monitoring the race. At that point, Bart did me a big favor. When Steve passed me I heard Bart say, “There’s our winner”.

I had an Incredible Hulk moment. I didn’t turn green, but adrenaline rushed through me and I told myself that I was not going to lose this race. I knew the remaining miles. There was a gradual climb for about 3 miles, then it leveled off, then there was a steep downhill, with a flat 50 to 100 yards to the finish. My plan was to stay in striking distance behind Steve on the uphill and start an all out attack on the downhill. I was working hard, getting warm, and carrying my gloves and hat. I saw the right turn and knew that after that, it was straight and flat to the finsh. When we got to the right turn, I was still behind Steve, but I was close. I made the right turn and threw the clothes that were in my hands in the air, and sprinted as hard as I could. I ended up barely winning. I love it when a plan comes together. After I caught my breath, Steve and I congratulated each other on a good race, and everyone hung out and cheered the other runners on to the finish line. 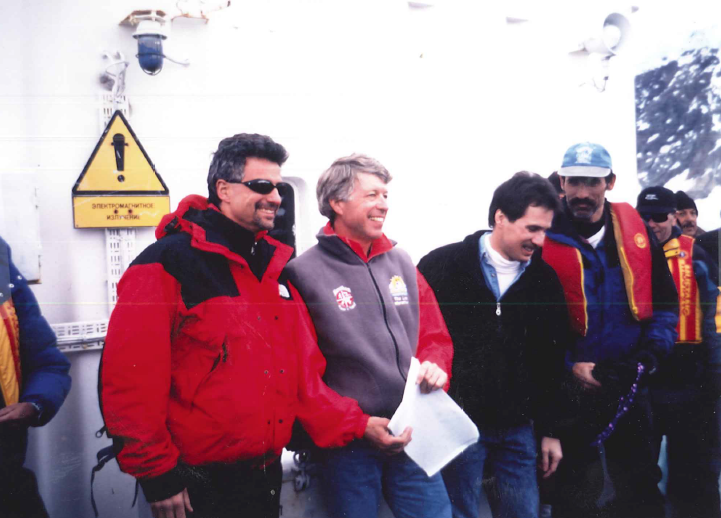 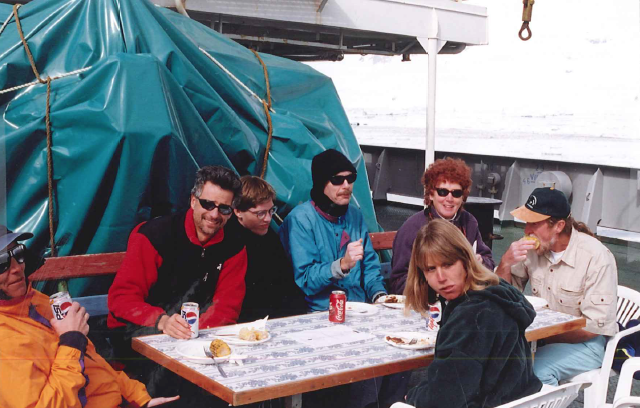 On board the ship that night, I was invited to sit at the Captain’s table for the remainder of the trip. At dinner that night, I formally met the captain for the first time. I said, “Hi, I’m Fred from Reno”. He looked at me and shook my hand. The Captain says, with a heavy Russian accent, “I shot a man in Reno just to watch him die”. At the time, I wasn’t familiar with Jonny Cash, and I thought “That’s weird. Is he threatening me?” Now I know the song lyric, and I totally get it! 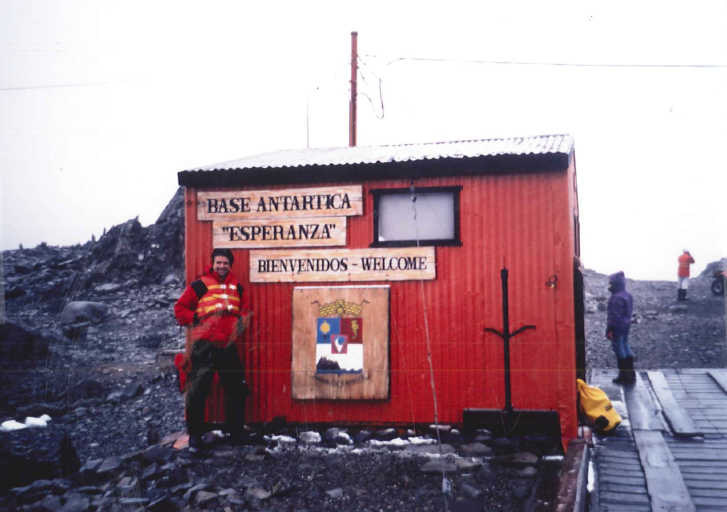 During the next couple of days, we toured around Antarctica. We went to Deception Cove. It’s a defunct whaling station and there is warm water, heated geothermally by steam vents from an underwater volcano, where some of our group went swimmimg. It was also interesting when we landed on the actual continent of Antarctica at the Esperanza Argentinan Base. The two day journey back to Ushuaia was much easier than the first crossing. The captain called it, “Drake Lake”. The Drake Passage is only as calm as it was for our second crossing once or twice each year. We were lucky.

It was a great trip. Marathon Tours did an outstanding job. I highly recommend them for any running tours that they do. I’d also like to send a shout out to Bart Yasso. Over the years, he has been very helpful to me personally, and also to the running community as a whole! I wish him happiness in his retirement. To say that the Antarctica Marathon is a unique running experience is an understatement! It’s not a place to run a PR, but it is a race that will challenge you in different ways, from the temperature, to the terrain, to the Drake Passage crossing. It is an excellent way to travel to Antarctica with a purpose, if visiting all seven continents is something you aspire to. It is certainly a race (and a trip) you will never forget! 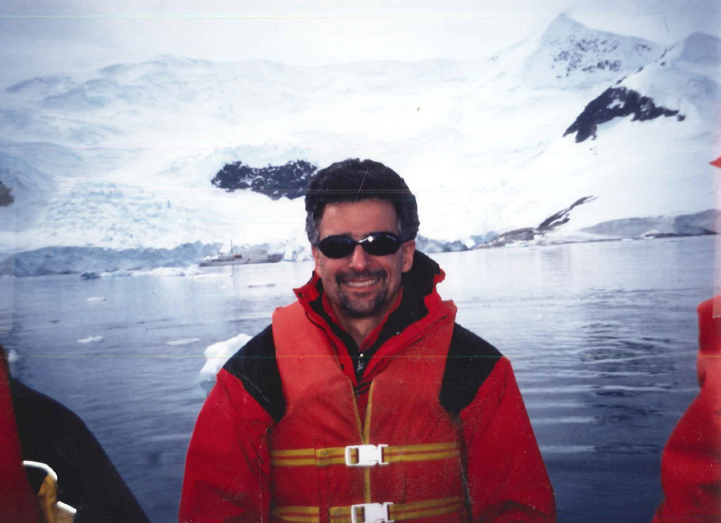