Trip Report #9 – Running in the Kingdom of the Thunder Dragon: The First Bhutan Marathon

In August 2002, my wife Deb and I had just gotten home from a trip to Europe. The following weekend, we were at our local running store in Reno, Eclipse Running, and I saw a flyer advertising the first-ever Bhutan International Marathon. It featured a picture of the Himalayas. Needless to say, I was interested. Very interested.

When I showed Deb the flyer, she said something along the lines of “We just got home; I haven’t even gotten the laundry done from Europe!” I checked the date of the race and asked her if she could get caught up on the laundry by November 13th. Ultimately, we decided to check it out.

The website on the flyer led us to a guy named Rick who was based in Portland. He was with a cycling company called Rose Pedal, Inc. who were working with Nima Tours & Treks in Bhutan. He was a cyclist himself, involved with the Bhutan Olympic Committee, and was working to bring 350 foreign runners to the race. He was helping to arrange visas, transportation, and other logistics. When we told him Deb wouldn’t be running the race (this pre-dates her marathon running), he asked if she’d like to borrow his bike and ride the course. She took him up on his offer, and we were going! 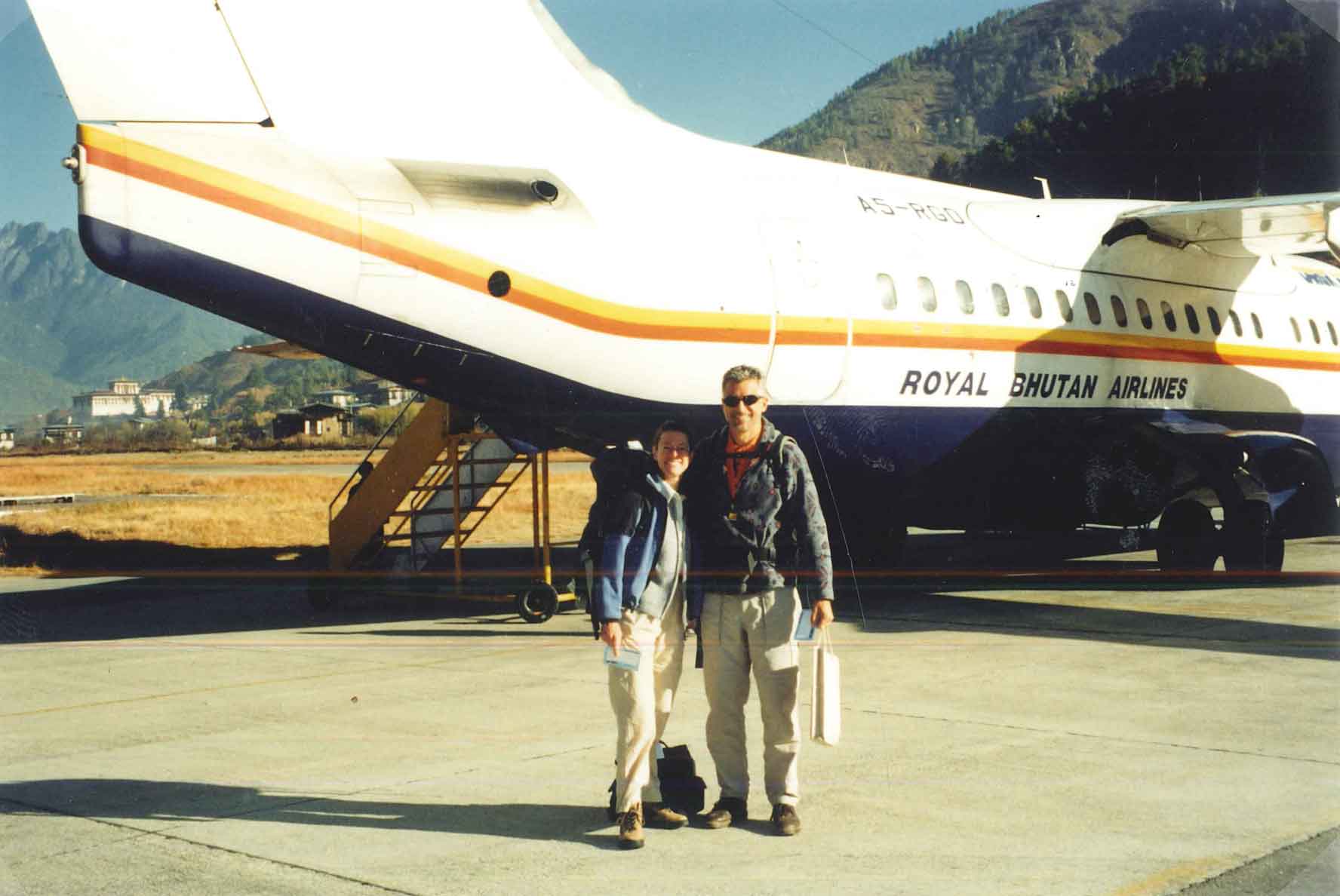 To fly to Bhutan (at least back in 2002) the only airline option was Druk Air, the national airline, whose planes were also the method of transportation used by the royal family and government officials. We flew to Bangkok and spent a couple of days sightseeing and then caught our flight to Bhutan. 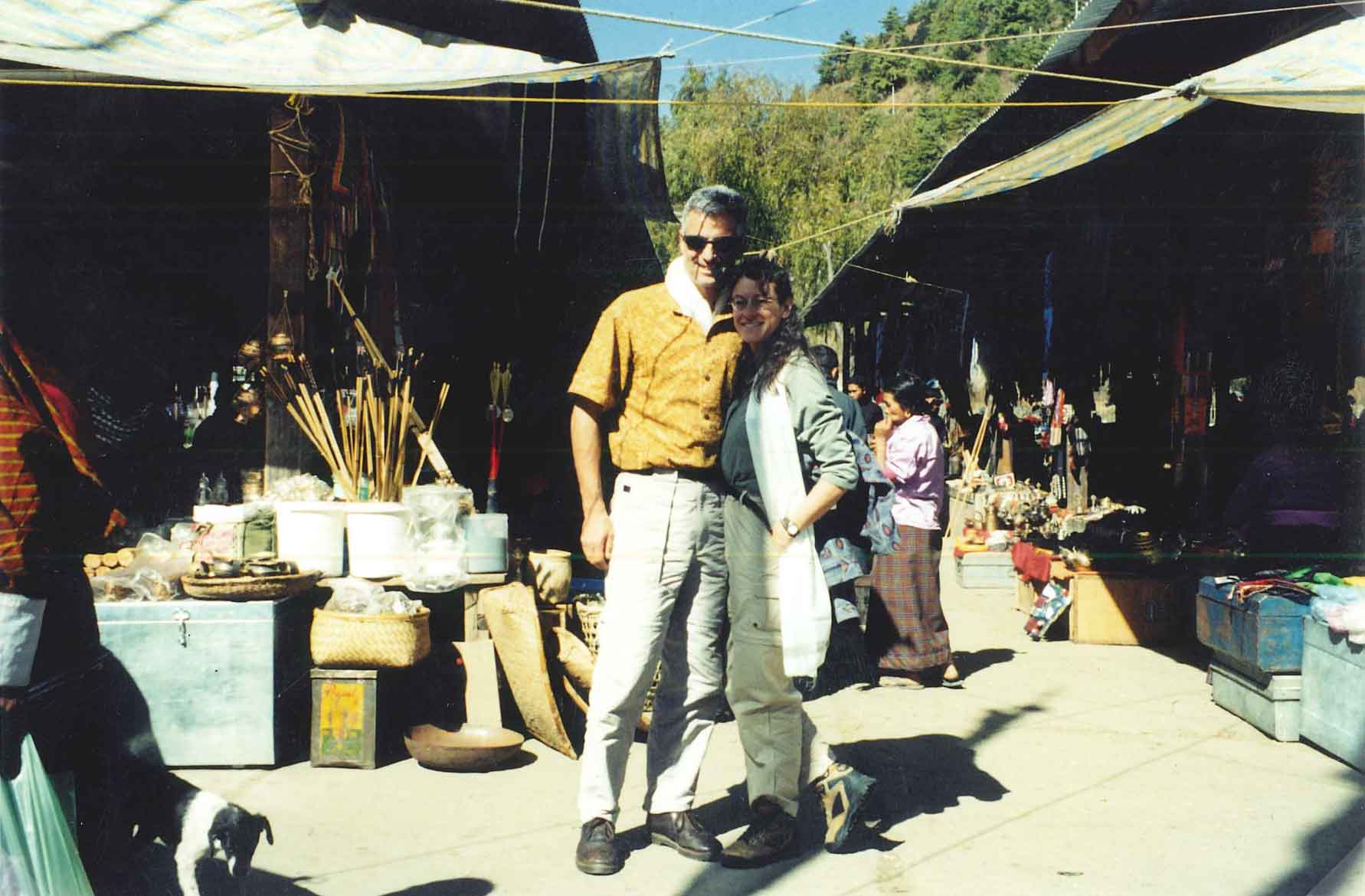 Flying in and seeing the profile of the Himalayas was so exciting. When we landed, we were met at the airport by a driver and guide who had been assigned to be with us for the entire trip. They gave us white prayer scarves and t-shirts with the race logo and welcomed us to Bhutan. Then, they took us to our hotel, where we met Rick. 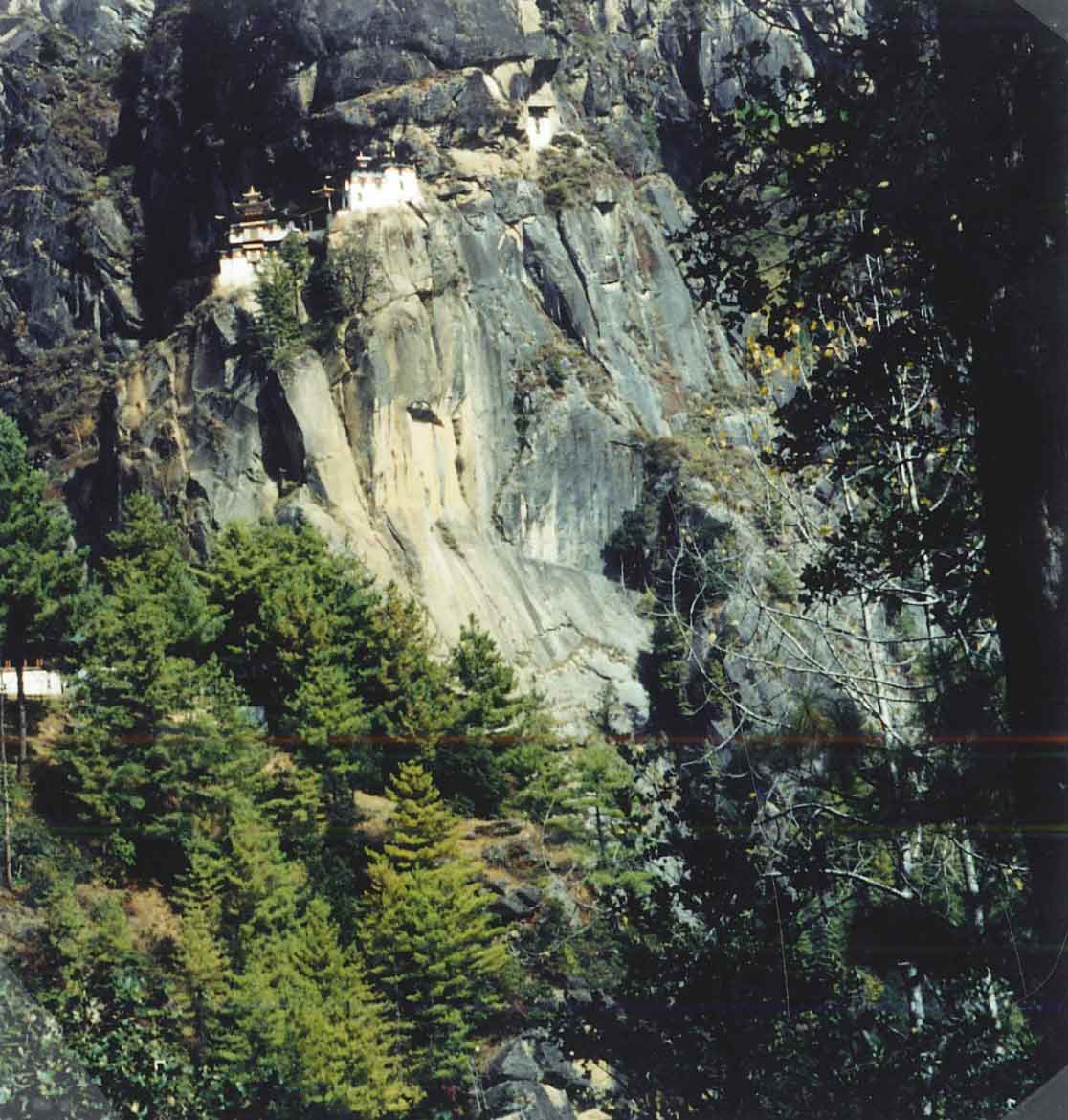 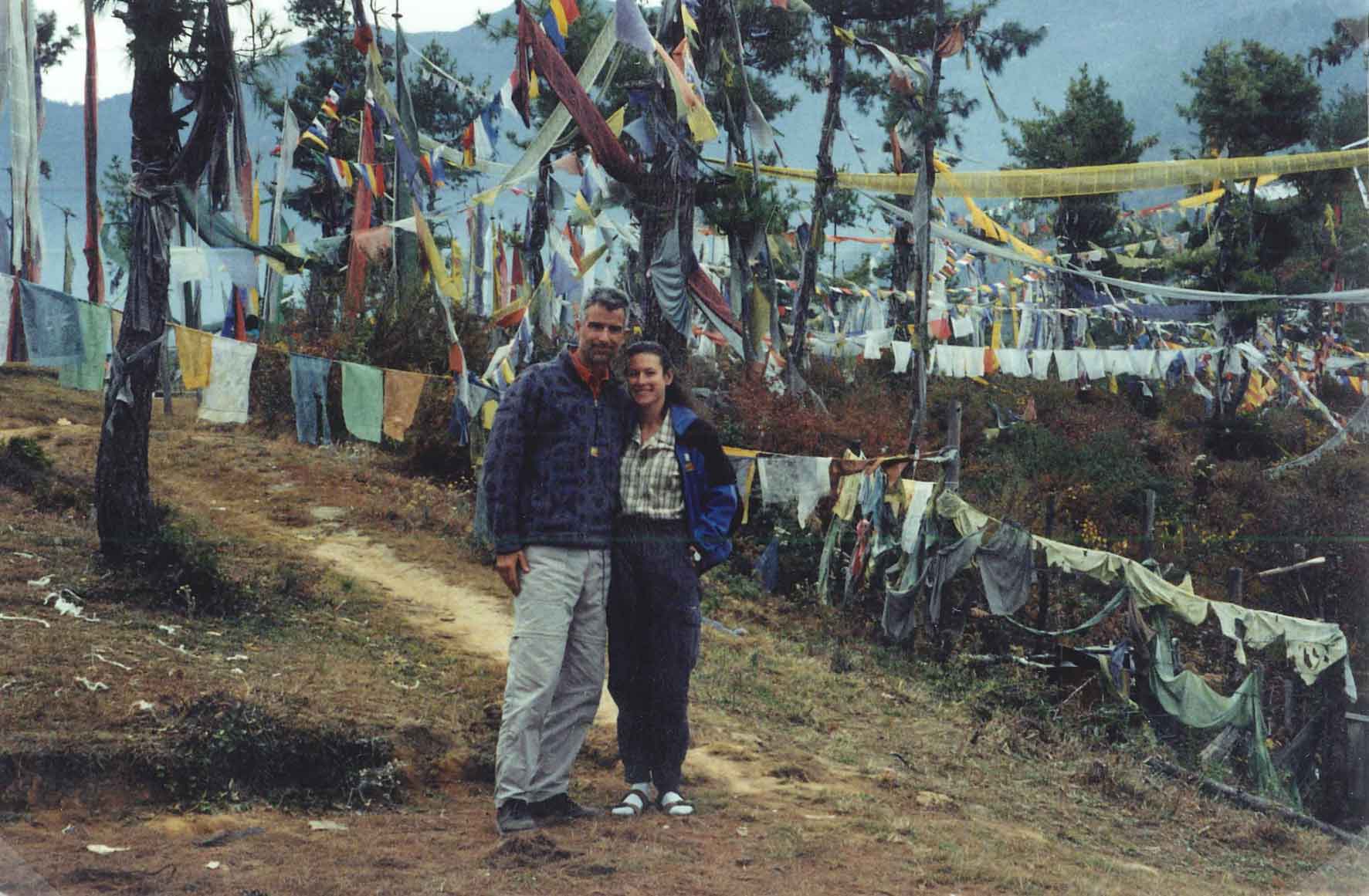 We had a couple days of sightseeing in the area around Thimphu, the capital. We visited the Tiger’s Nest Monastery and other traditional Bhutanese fortified buildings, known as Dzongs. We also spent some time hiking and watching Olympic athletes in an archery competition in the National Stadium. During this time, we also had a chance to meet the other foreigners who were running the race, as well as a few local athletes. 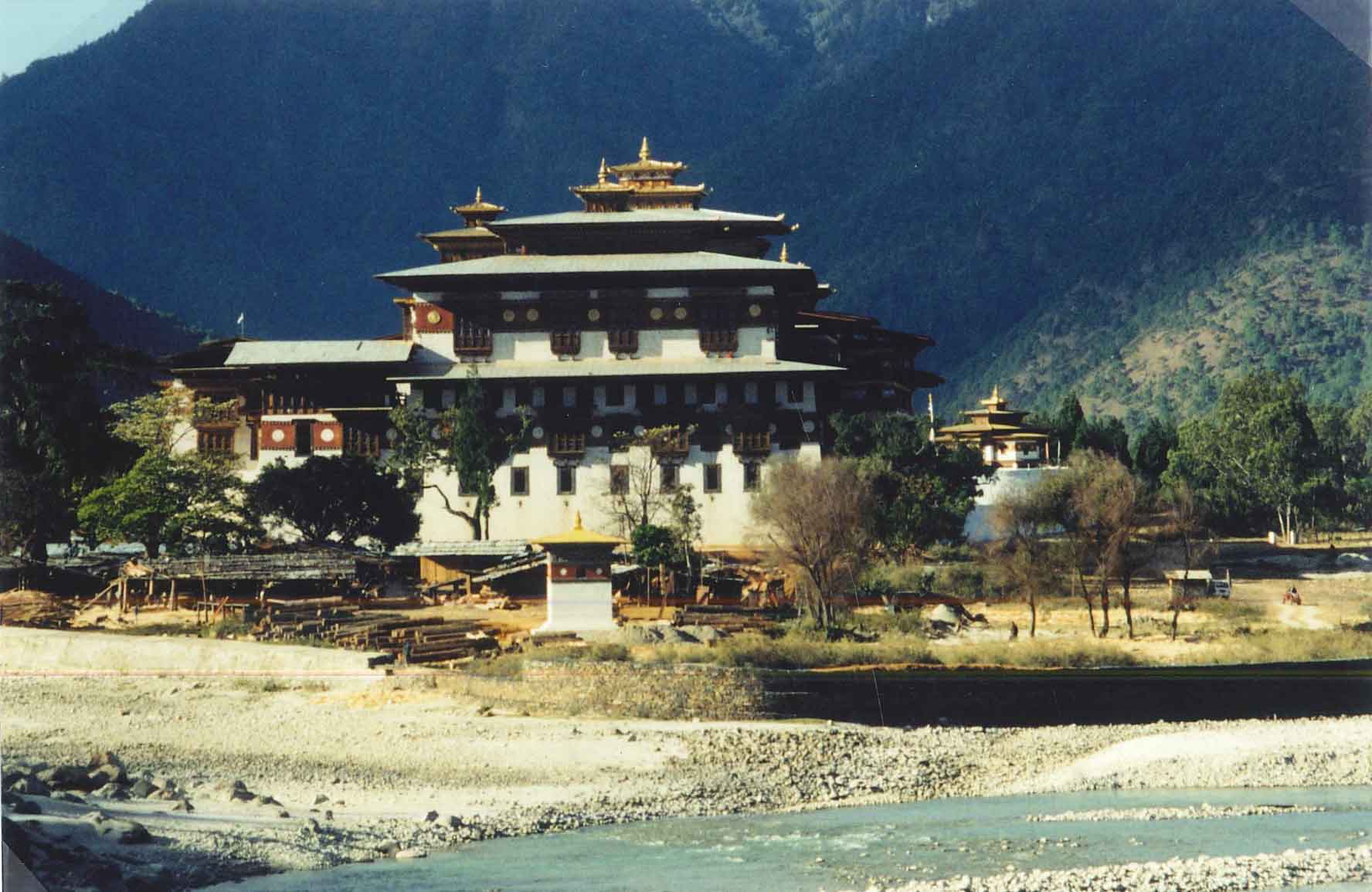 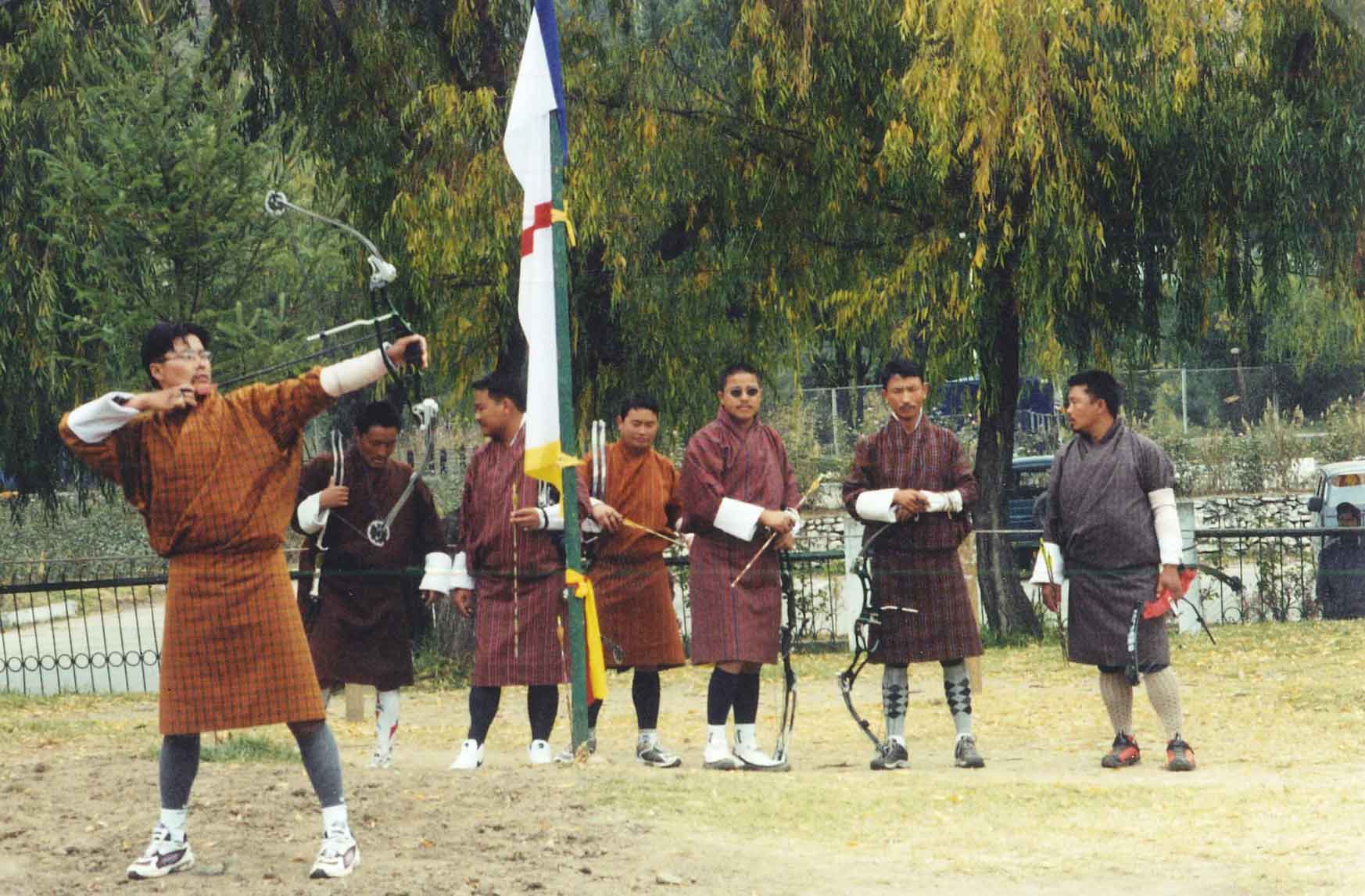 The day before the marathon, the local running community hosted a Friendship Run 5K in Thimphu. Deb ran, and because I was running a marathon the next day, I just jogged with her. The altitude was noticeable. The average altitude for the marathon (as I learned that morning) was 2300 meters—about 7500 feet. 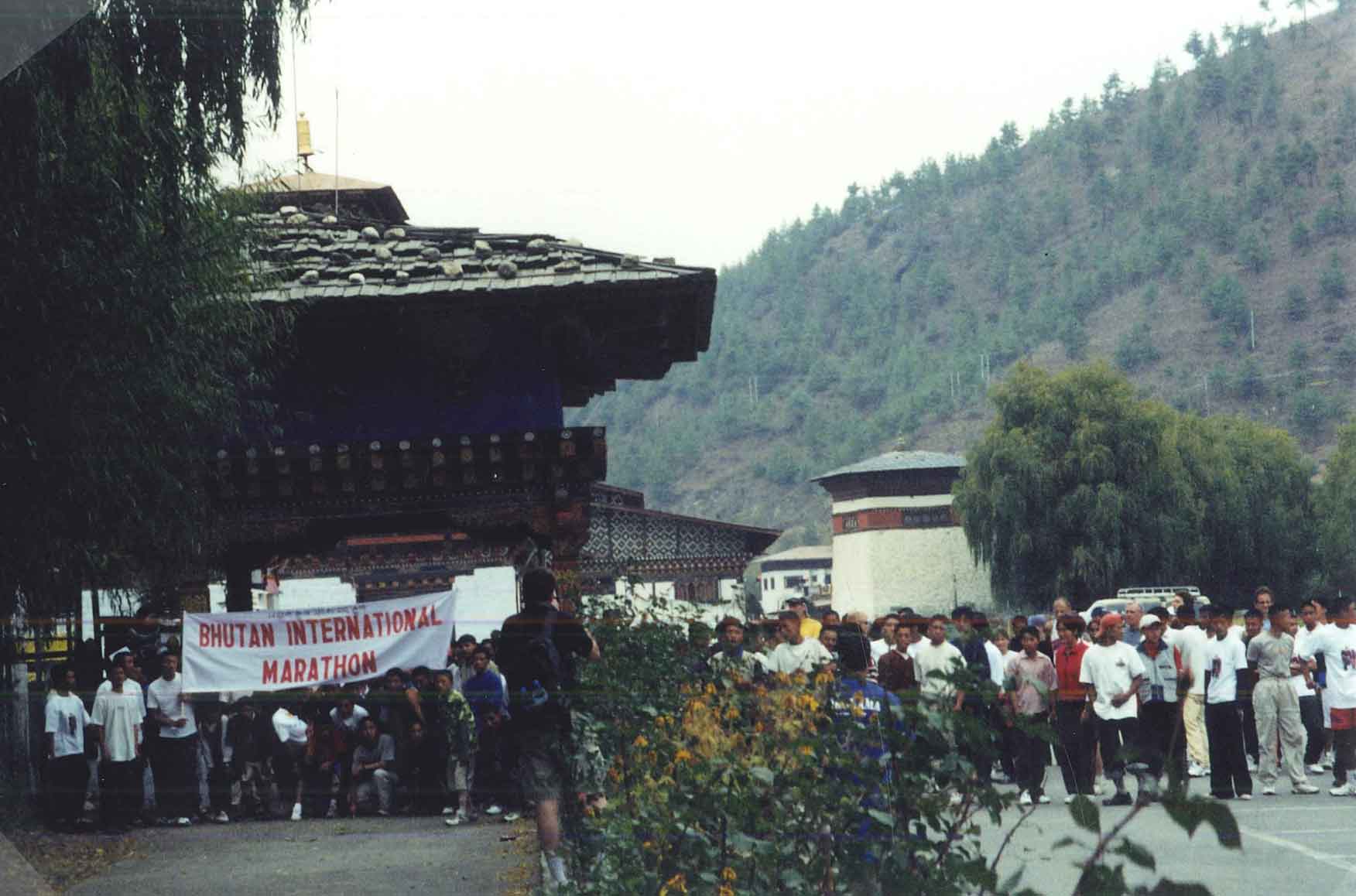 Race morning was spectacular. I will never forget it. It was the perfect combination of pre-race excitement, high altitude scenery, Himalayan culture, and nervous anticipation. We assembled at the start line near the town of Paro before sunrise. The race organizers had arranged a Buddhist puja ceremony to bless the race and bring safety and success to the runners. In addition to the prayers and the burning of branches, there were monks who played traditional instruments like drums and horns. 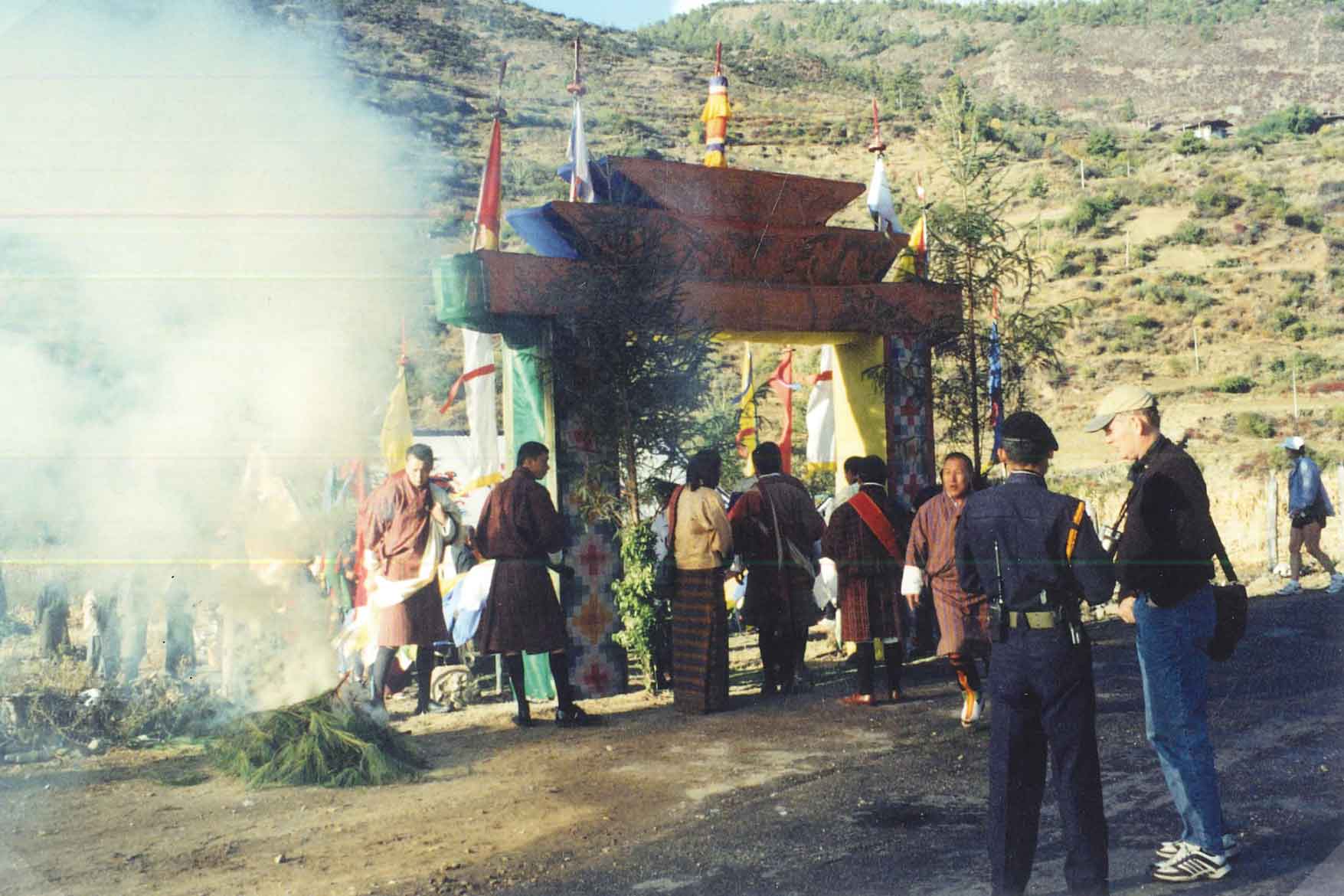 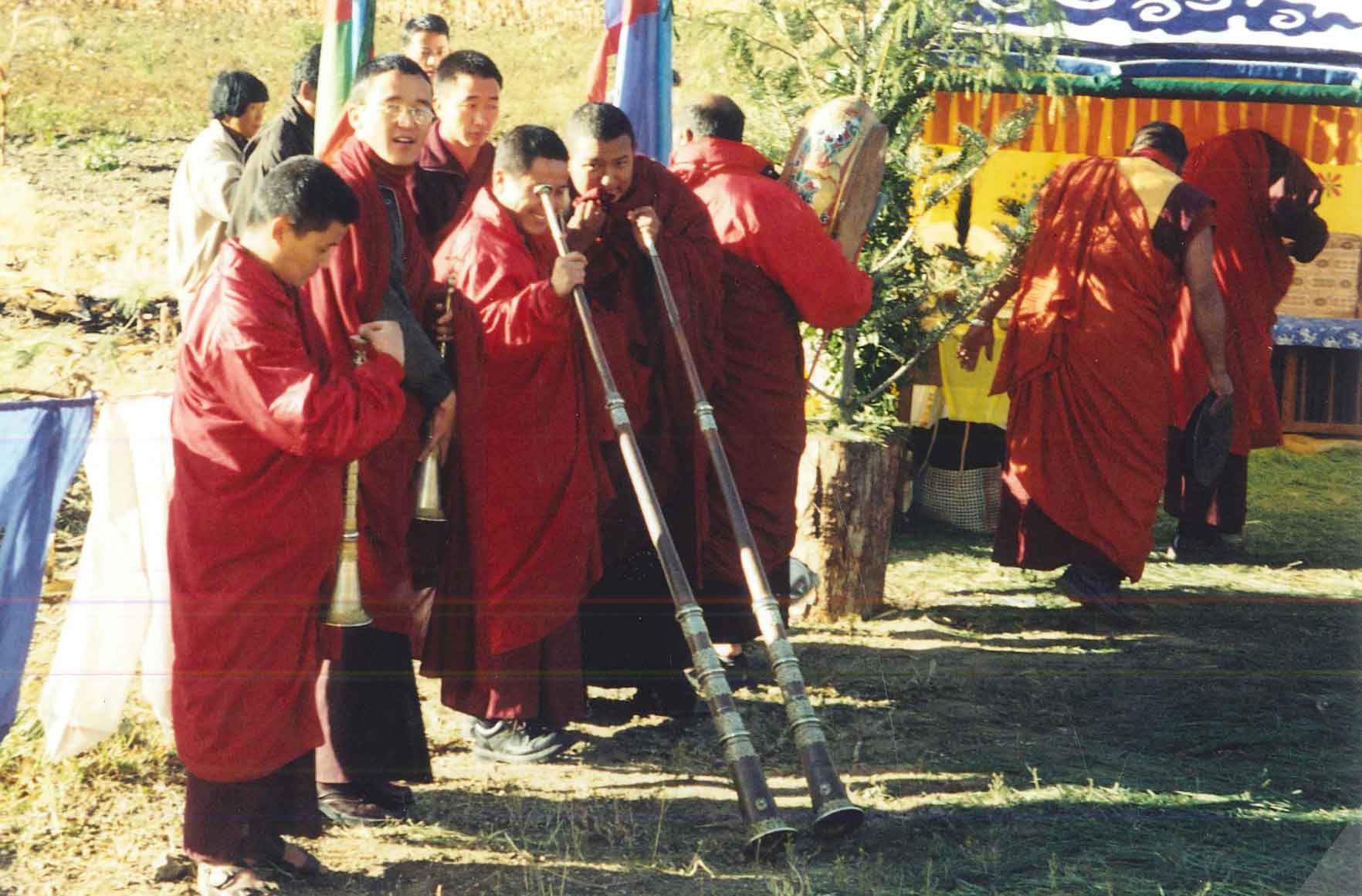 The course was challenging but beautiful. While the contestants ran, Deb rode Rick’s bike and took pictures of the scenery, the runners, and locals cheering us on from the sides of mountain roads. With permission of the race organizers, Deb’s bicycle had a basket full of water bottles, and she was basically a mobile aid-station for a lot of thirsty runners along the course. 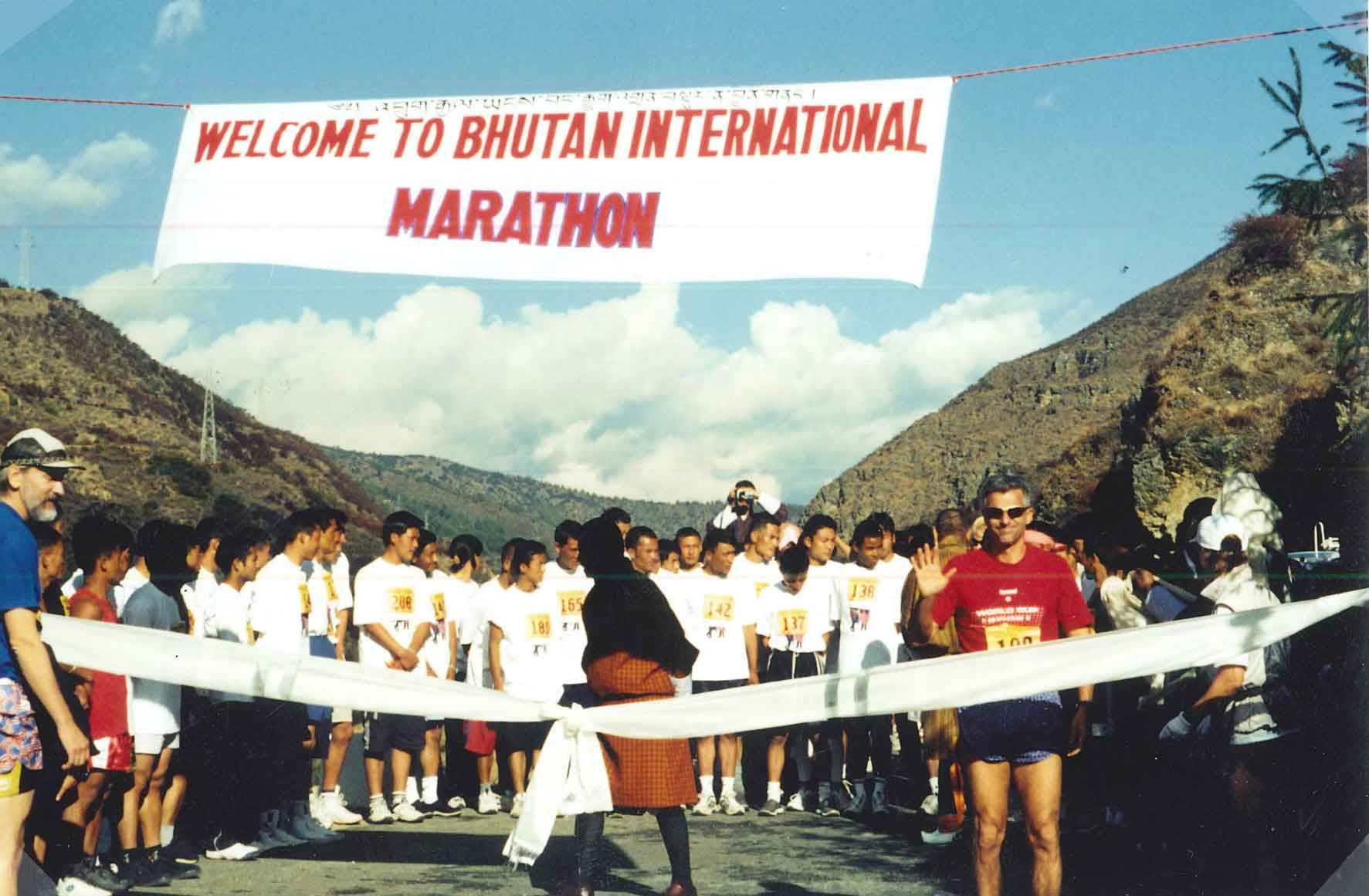 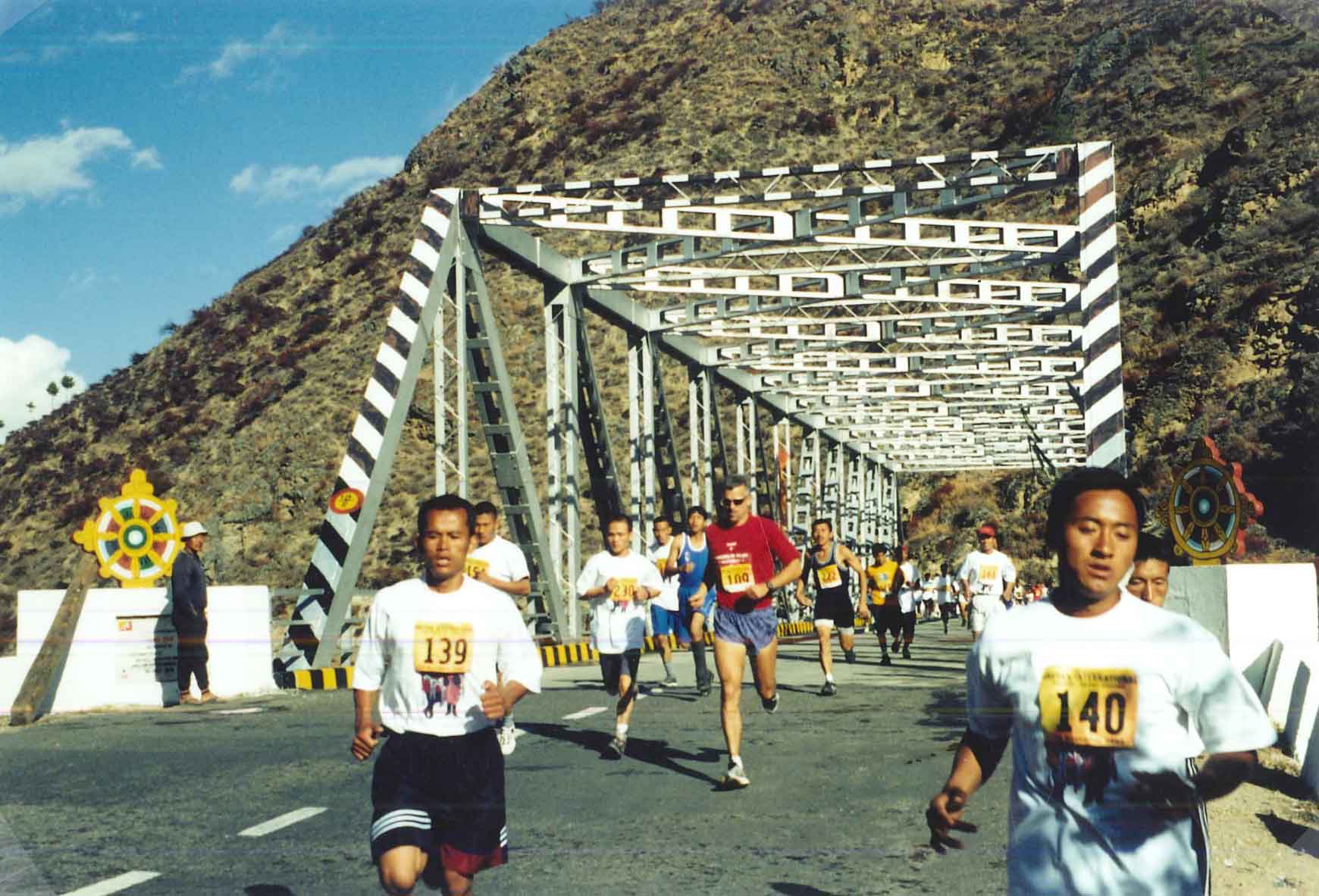 Running into Thimpu, there were some young Bhutanese runners in front of me. They were Olympic hopefuls that I had met the day before, all of whom were really nice guys. I had joked with them at the Friendship Run that since I was old enough to be their father and since I only live and train at 1500 meters that they better finish in front of this old man. Three of them did. I was fourth overall and the first foreign runner. It was a great finish because Deb had the whole crowd yelling “FRED!” as I came to the finish line. After I finished, they gave both Deb and me medals, and brought me a chair and a bottle of water. It was first-class service. 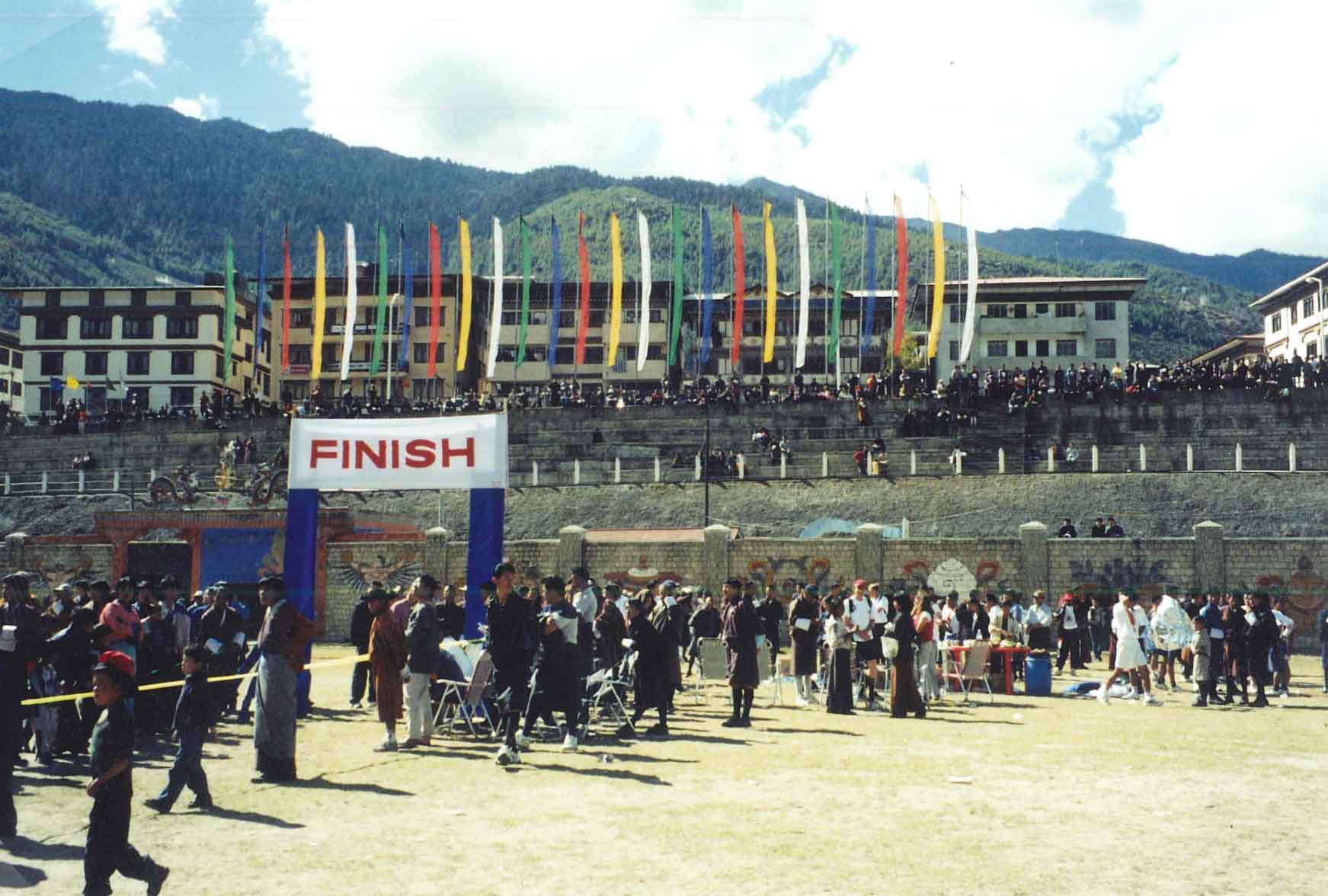 Later that night there was an awards ceremony and dinner with the Olympic hopefuls, the foreign runners, an Ambassador, members of the Olympic committee and the Director of Tourism. They presented all of the international runners with traditional Bhutanese dress: a gho for each man and a kira for each woman. With everyone wearing ghos and kiras, we had a huge dinner and a bonfire with singing and traditional dancing. 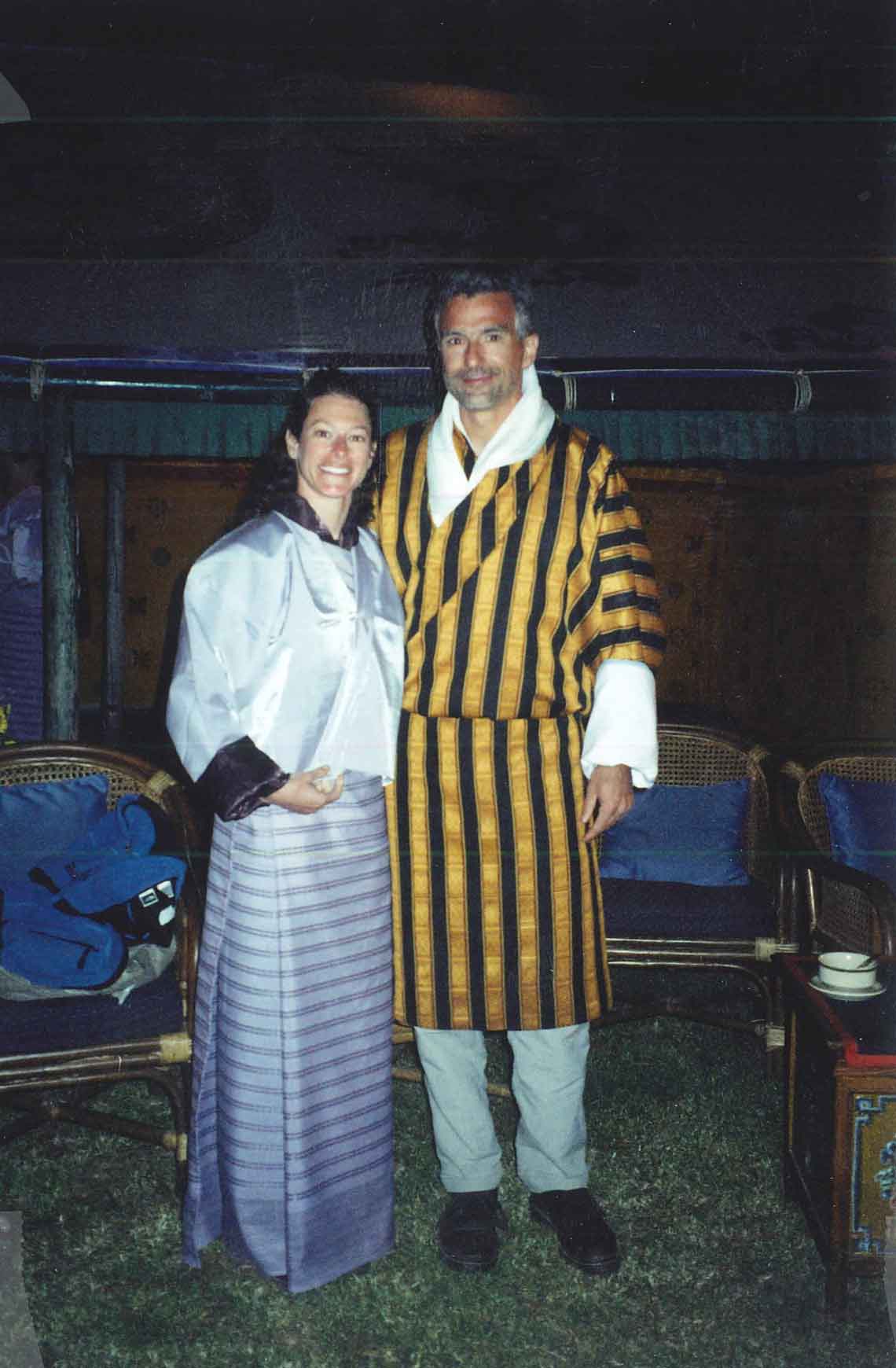 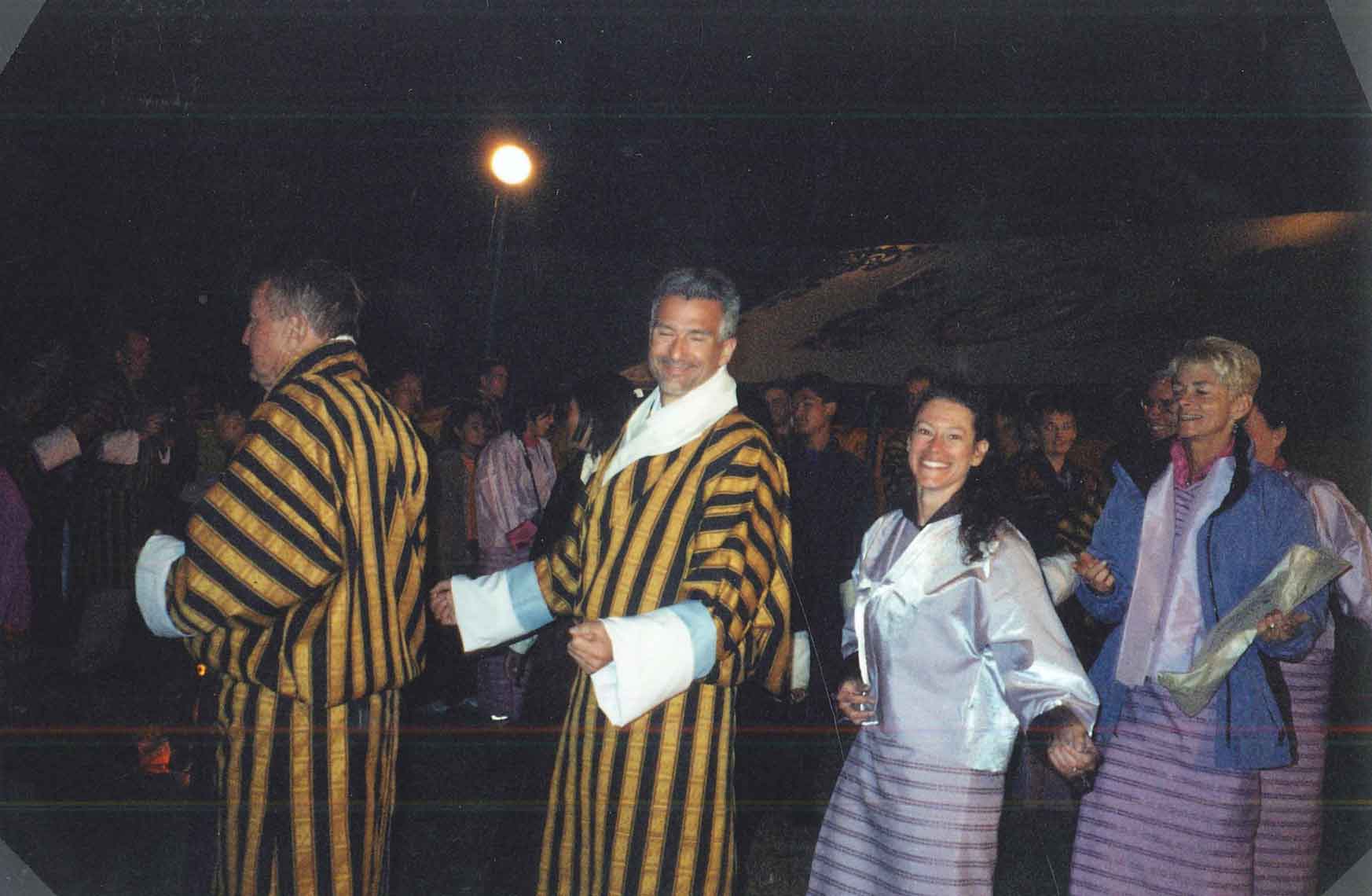 After the race, we stayed in Bhutan for another couple of days, doing more sightseeing and hiking, before going back to Bangkok for our last days of vacation. 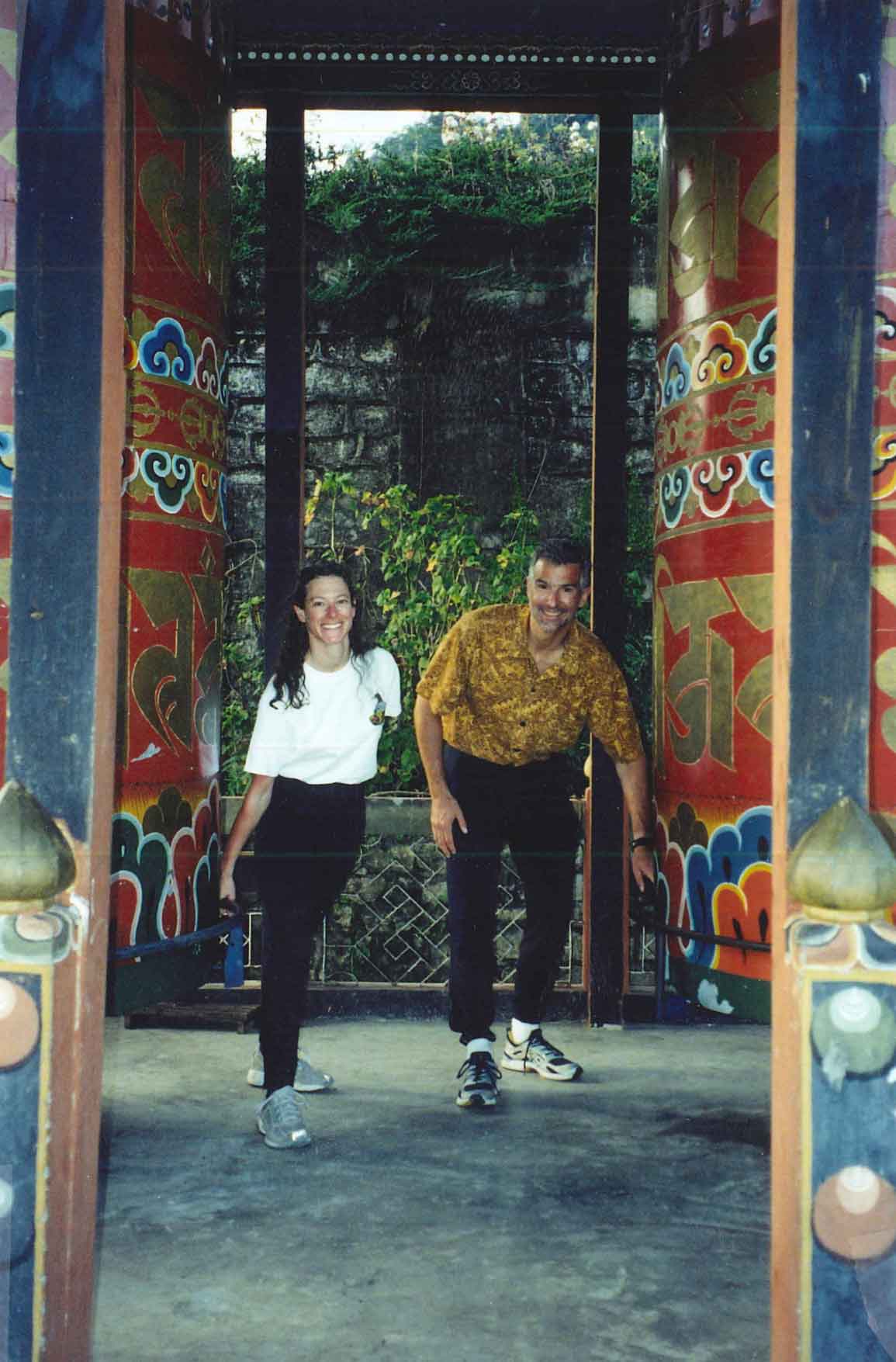 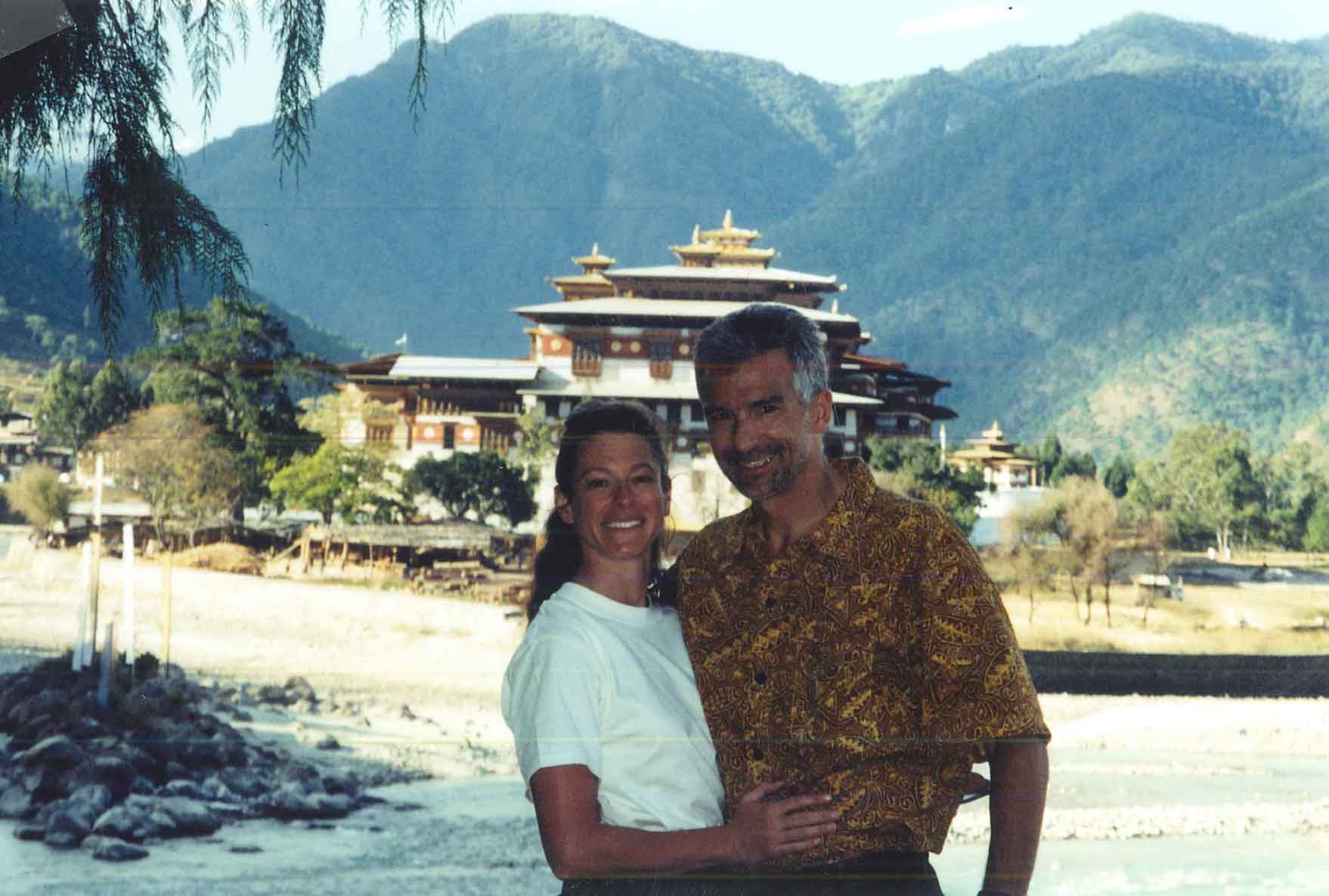 Visiting the Himalayan Kingdom of Bhutan was a great experience. Running the first marathon in Bhutan was a worthy and memorable challenge. But hands down, participating in and experiencing the Bhutanese culture was the best part of the trip. It was an unforgettable, once-in-a-lifetime experience.