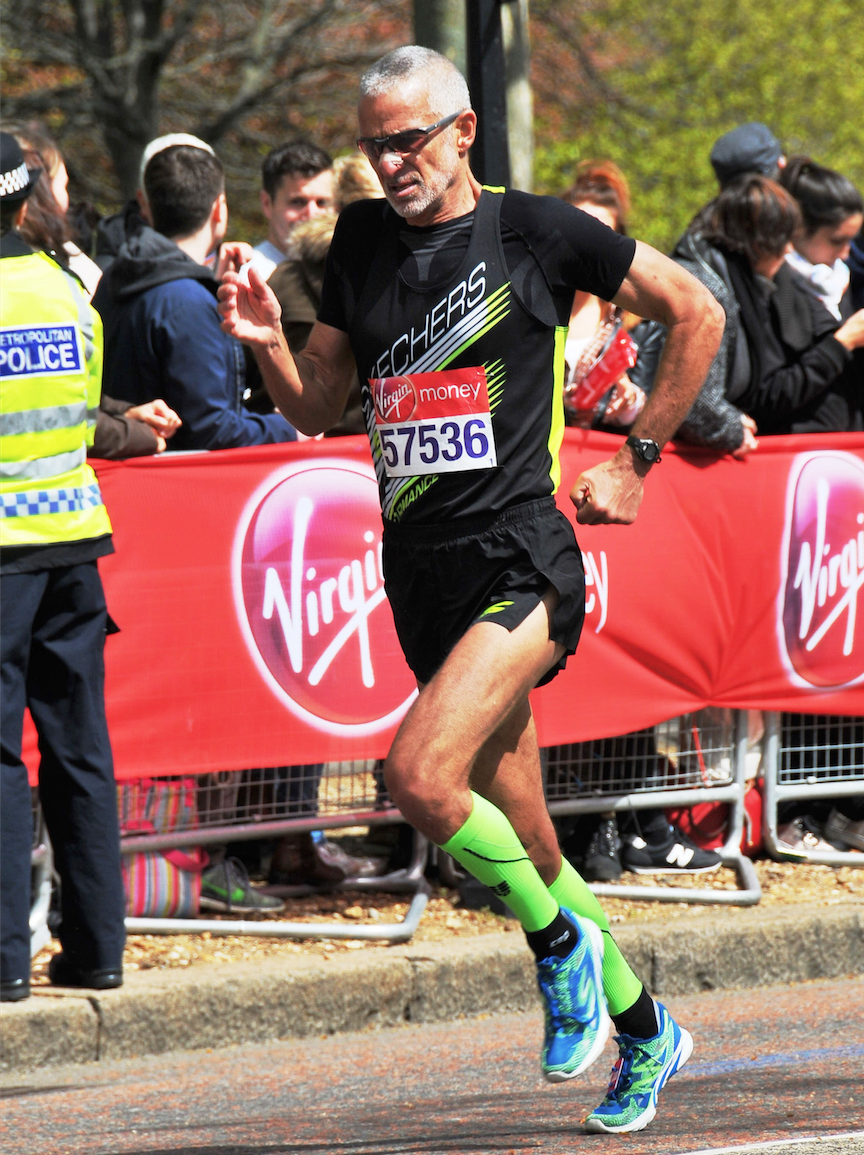 With a win in April in London, Fred Zalokar has now won his age group at five out of the six World Marathon Majors.

By Alison Wade  MONDAY, MAY 16, 2016, 3:48 PM
Fred Zalokar on his way to winning the 55-59 age group at the 2015 New York City Marathon. MARATHONFOTO
For many years, Fred Zalokar, 55, of Reno, Nevada, didn’t have much interest in running road marathons. He ran 100-mile races and climbed mountains. When his wife, Deb, tried to talk him into running each of the World Marathon Majors races with her, he told her she’d have to do it solo.But Zalokar eventually relented, and between 2010 and 2012, he ran the five original World Marathon Majors races: Berlin, Boston, Chicago, London, and New York City. Zalokar won his 50–54 age group in Berlin (2:37:03 in 2010), Boston (2:34:46 in 2011, his personal best), and Chicago (2:35:10 in 2012).“I thought I was done, because I ran all five,” Zalokar told Runner’s World by phone. “In the back of my mind, I was thinking, ‘Maybe when I turn the next age group, I’ll try to run the two I didn’t [win].’ Then, all of a sudden, Tokyo pops up, and I go, ‘Oh damn, I guess I’ve got to go to Tokyo.’”Tokyo was added to the World Marathon Majors in 2013, and Zalokar ran it the following year. Despite having to start behind many slower runners and taking eight miles to get out of traffic, Zalokar finished second in his age group there in 2:40:35.

Gaining entry into Tokyo isn’t easy, but if Zalokar can earn a spot in the 2017 race, to be held February 26, he hopes to complete a sweep of age-group titles.

Zalokar, who will turn 56 on May 27, is also interested in taking a crack at Norm Green’s American marathon record for 55–59 year olds, which is 2:33:49, and would require a lifetime PR.

Although he’s been a distance runner since he was in his 20s, until recently Zalokar’s focus lay elsewhere.

“I’ve never really trained like this before,” he said. “My passion’s always been mountains and traveling, and it still is.”

Zalokar “collects countries,” and he’s been to 119 of them so far, including the highest point in 63 of those countries. He plans to hit more high points in Europe this summer.

But now he simultaneously focuses on running well in the marathon. For Zalokar, that has meant high mileage—he averaged 150 miles per week over a seven- to eight-week stretch leading up to London, with a high of 162 miles—and just as important, keeping his weight down.

Zalokar is six feet tall, and he has been since sixth grade. In high school, his primary athletic focus was football. He also wrestled for one season and ran track, but his longest event at the time was 440 yards. He didn’t become an endurance athlete until he moved to the Reno area in the mid 1980s.

Zalokar’s high weight was around 230 pounds, but now he weighs in around 145 and credits that weight loss for his faster times in recent years. Zalokar said he’s not fanatical about what he eats, but he tries to eat well and has to be vigilant.

“People look at me now and are like, ‘Oh, you’re just naturally skinny,’ and no, [working at it] is a constant for me. But it feeds on itself. When you do well, it’s positive reinforcement,” Zalokar said.

Zalokar has been the general manager of the Lakeridge Tennis Club, a multipurpose fitness facility in Reno, for the past 30 years.

In order to squeeze his training into his 50-hour work weeks (when he’s not traveling), Zalokar usually starts his day by 3:30 a.m. at the latest. Six out of seven days, he does his first run of the day on the treadmill at his workplace, and he is at his desk by 6:00 or 6:30. He takes a two-hour lunch break to run again, this time outdoors.

Zalokar works out four to five hours per day most days. In addition to running, he lifts weights, stretches, and does Pilates. He saves his social life for the weekends and the runs he does with training partners, most of whom are at least 20 years younger than he is. Zalokar is usually in bed by 7:30 or 8:00, so he can begin the routine again the next day.

Though he gets injured from time to time, Zalokar says he has no major chronic issues. “Thank God for KT tape,” he jokes. “I don’t know how I’d survive without KT tape.”

Regardless of whatever else Zalokar accomplishes, he’s thankful for his longevity and the fact that he’s still able to run at a high level.