Fred Zalokar won the 55–59 division in Tokyo, completing a World Marathon Majors quest that began in 2010. 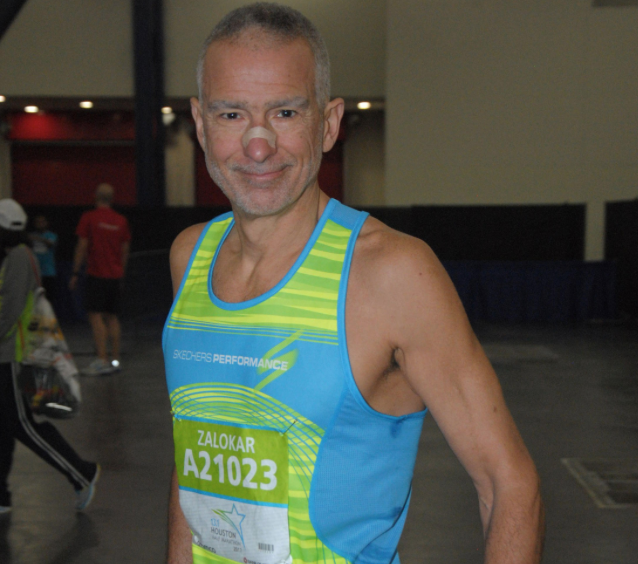 With his age group victory at the Tokyo Marathon on February 25, Fred Zalokar, 56, of Reno, Nevada, is thought to be the first runner ever to win his age group at all six World Marathon Majors races—Tokyo, Boston, London, Berlin, Chicago, and New York City.

Zalokar’s tally of age-group wins started in 2010, and he secured three victories in three years in the 50–54 age group:

That left him with one more race, Tokyo, to complete the sweep.

Zalokar’s training this winter went well and he felt fit and ready for the challenge. He was hoping to win his age group and run faster than 2:40. But he didn’t feel at his best during the race.

“I cannot remember a race where I was passed by so many people,” Zalokar wrote in an email to Runner’s World on March 21. “I kept looking at my splits and they were okay, but people kept passing me.”

Zalokar reached halfway in 1:18, but he was slowing each 5K. When one of the elite female runners passed him in the 25th mile, he tried to key off her.

“I thought, ‘I’m going to stick right with her,’” he wrote, “and we passed a bunch of people in that last stretch. That was probably the difference between 2:45:42 and 2:47. Given that the second-place guy [Satoru Narabe of Japan] was less than a minute behind me [in 2:46:33], that resolve at the end really mattered.”

Zalokar believed his 2:45 was likely good enough for the win. But age-group results took 11 days to be released. “That was a tough wait to find out whether I won,” he wrote.

Three weeks after Tokyo, Zalokar was on the starting line of the Los Angeles Marathon, where  he successfully defended his 2016 age-group title with a 2:49:10 win in the 55–59 division.

Two high-level marathon efforts in the span of three weeks was a test, and Zalokar said he’s now looking forward to focusing on shorter events. Next up is the May 7 Orange County Half Marathon, which serves as the USATF masters national championship at the distance.

But he is not abandoning the full marathon completely or backing down from his high-mileage training, which reaches to about 150 miles per week at its peak.

“I’d like to break Norm Green’s 2:33:49,” he says of the American 55–59 marathon record that has held up since Green ran it in 1988. “That’s fast, but I believe if I stay focused and healthy, it’s within my reach. I just want to keep going, trying to get faster, stronger and do the best every day, every mountain, every race.”  Read Full Article