In the summer of 1997, I was on my way to the Alps with two climbing buddies, Sean and Dave. We had a plan to climb three of Europe’s most iconic mountains: Mont Blanc, Monte Rosa, and the Matterhorn. This last one is perhaps the best-known and most visually striking mountain in the world. All climbers dream of one day climbing the Matterhorn, and we were on our way to make that dream a reality. Our plan was to climb Mont Blanc first, then move on to Monte Rosa, and save the biggest prize, the Matterhorn, for last. 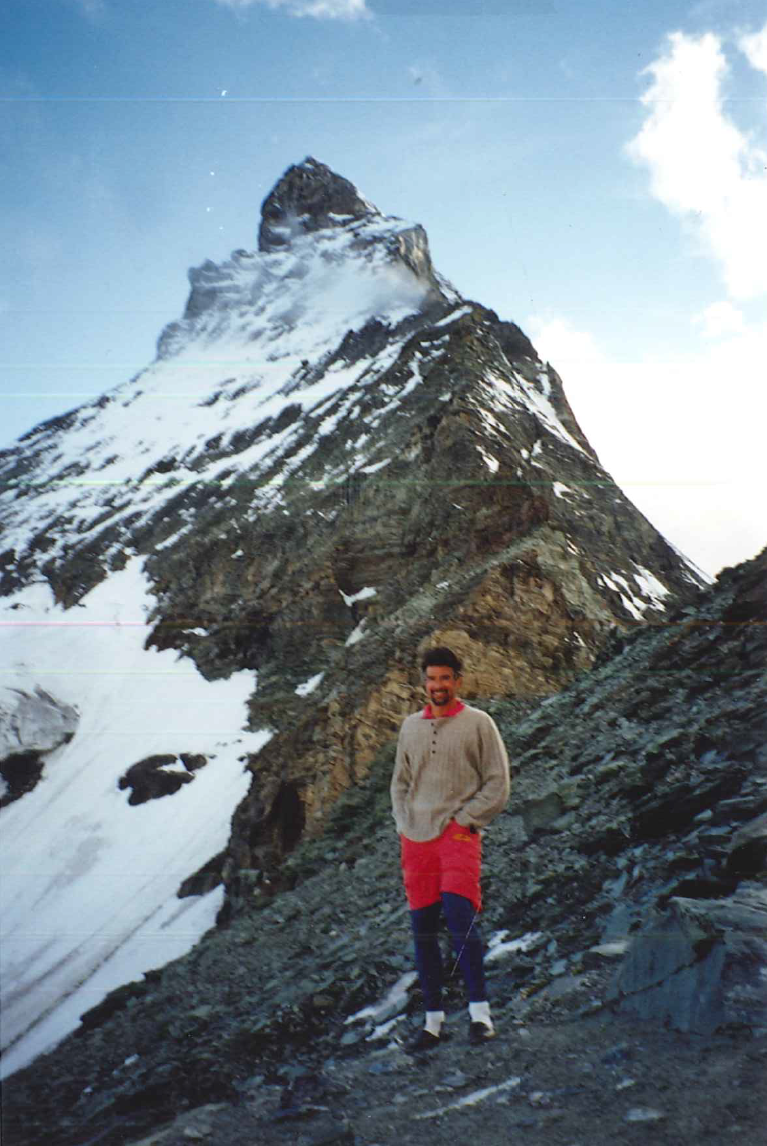 Before we left the US, Sean had faxed me an article from USA Today about what he called a “situation in the Alps”. According to the article, nearly a hundred climbers had died on this mountain range in 1997 alone; because of the rash of recent deaths, officials were considering instituting mandatory safety rules and requiring licenses for anyone who wanted to climb. Sean underlined this part of the article and wrote a note to me in the margin: “You’d better get your license so we can go climbing”.
Undaunted, I put on my best James Bond impression and responded, “Fred Zalokar: licensed to climb”. I was up for the challenge, and I knew Sean would be, too. Dave, on the other hand… Well, Dave was a novice. Sean and I decided not to share the USA Today piece with him.
Off the three of us went, looking for adventure in Switzerland, but when we got to Geneva, our climbing equipment wasn’t there. Somehow, Swiss Air had a mix-up with our luggage, and it was going to arrive a day late. We were not happy at the thought of losing a day off our itinerary. The three of us liked to be in constant motion; the plan had been to arrive, climb three mountains in quick succession, and then leave as quickly as we had come. We hadn’t even booked hotel reservations in advance.
Still, there wasn’t much we could do, so we got our rental car, drove to Chamonix, and found a hotel. We called Swiss Air to tell them where we were staying, and they promised to get our climbing gear to us as soon as it arrived. Then, we settled in and prepared ourselves for a long, stifling wait.
As it turned out, the wait was not long at all. At two o’clock the following morning, someone started pounding on our hotel door. Groggy and disoriented, I went to answer, only to discover that our gear had arrived and that Swiss Air had driven it all the way out to Chamonix for us. Kudos to them! Our plan was back on track. The next day, we would climb.
On July 27th, 1997, the three of us summited Mont Blanc, the highest mountain in the Alps. Dave, new to the climbing scene, decided he’d had enough, but on July 30th, Sean and I summited the Dufourspitze, the highest peak of Monte Rosa. With two mountains down and no issues so far, it was time to turn our attention to the Matterhorn.
When we arrived, conditions on the mountain had been deemed so dangerous that even the guides were not climbing. Our thought: Great! It meant there would be fewer people on the mountain. We woke up the morning of July 31st, ready to take on the Matterhorn. The only problem—really, an insignificant detail—was that it was snowing sideways, and the forecast promised no change in the weather.
Frustrated and not actually wanting to die despite our bravado, Sean and I descended. We had no plan, and to attempt the Matterhorn in that kind of weather would just have been stupid. Instead, we went to Montreux and turned north, ending up at the hilltop town of Gruyere. By this time, it was August 1st, Swiss National Day, so we partied with the Swiss! A lot of fireworks, a lot of alcohol, and (go figure) a lot of Shakespeare. It was a surprising, fun time, and it almost made up for us getting weathered off the Matterhorn.
Almost.
On the morning of August 2nd, the weather report looked more favorable. We weren’t scheduled to fly home until August 4th, so after a brief conference, Sean and I decided to drive back to the town of Zermatt and attack the Matterhorn again. I don’t know what Dave thought of us, our breakneck pace, or our determination to get all three summits under our belt; what I do know is that he never came on another climbing trip with us again. We left him down in Zermatt as we ascended to the alpine hut at the Matterhorn’s base and prepared to climb. 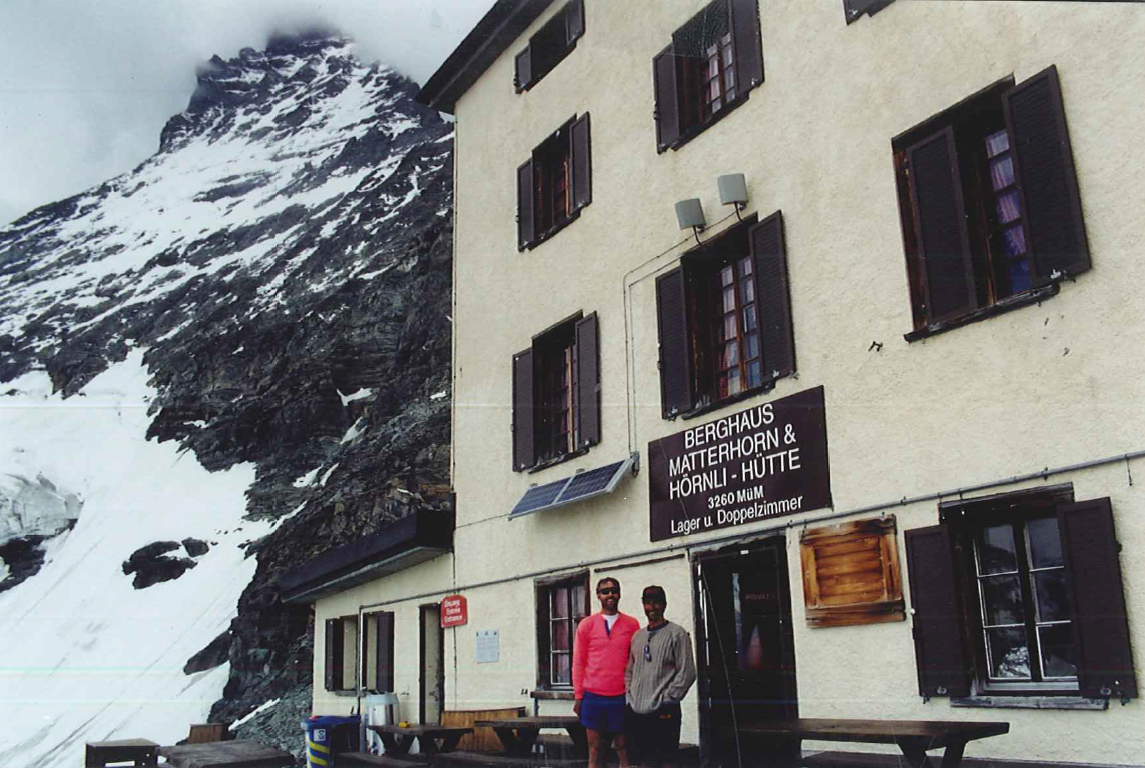 The morning of August 3rd, the weather was good. When we started our climb, there were probably half a dozen people on the mountain; on a normal day, there would have been at least a hundred. Although the weather had improved, it was still far from ideal, and we had trouble finding our route due to reduced visibility. We got off-track and had to retrace our steps numerous times, and as a result, we lost a lot of time. When finally reached the hut stationed at 4000 meters’ altitude (near the summit), it was getting late. We had to make a decision. We could keep climbing and hope to summit, but we would have to spend the night on the mountain and miss our plane the next morning. Or, we could go down. Since Dave was still waiting for us down in Zermatt, and since we were his only way of getting to the airport and back to the US, we reluctantly decided to descend. The highest point we reached on the Matterhorn was 4000 meters. 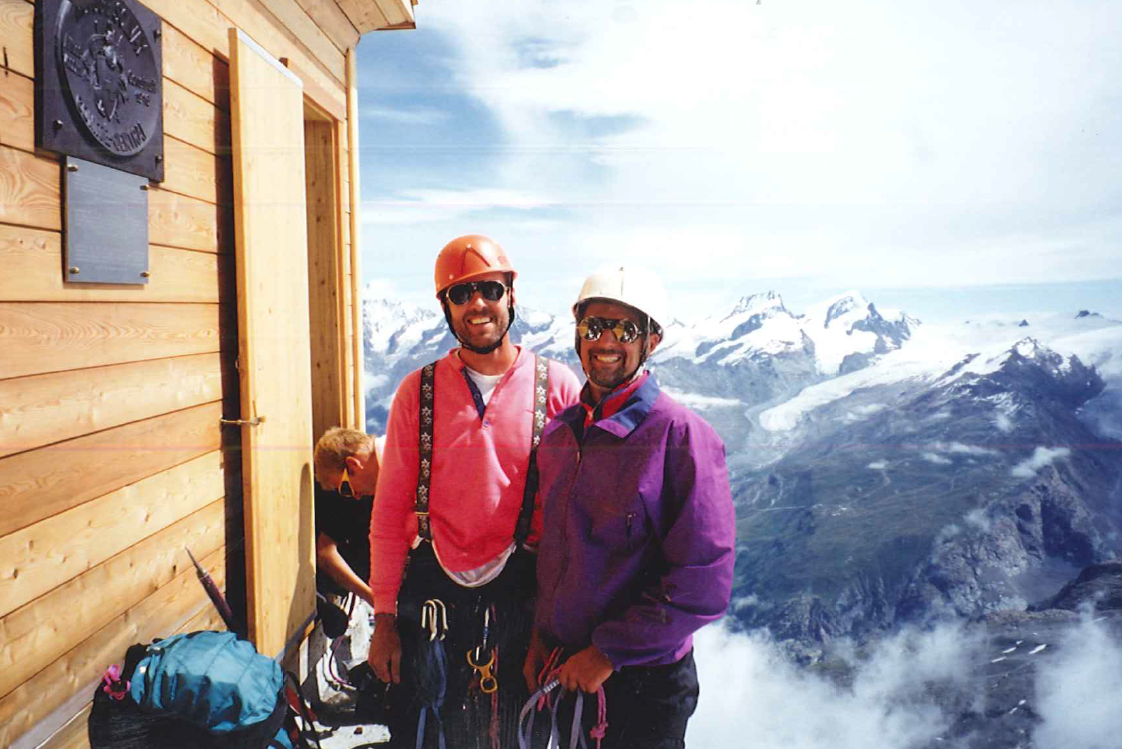 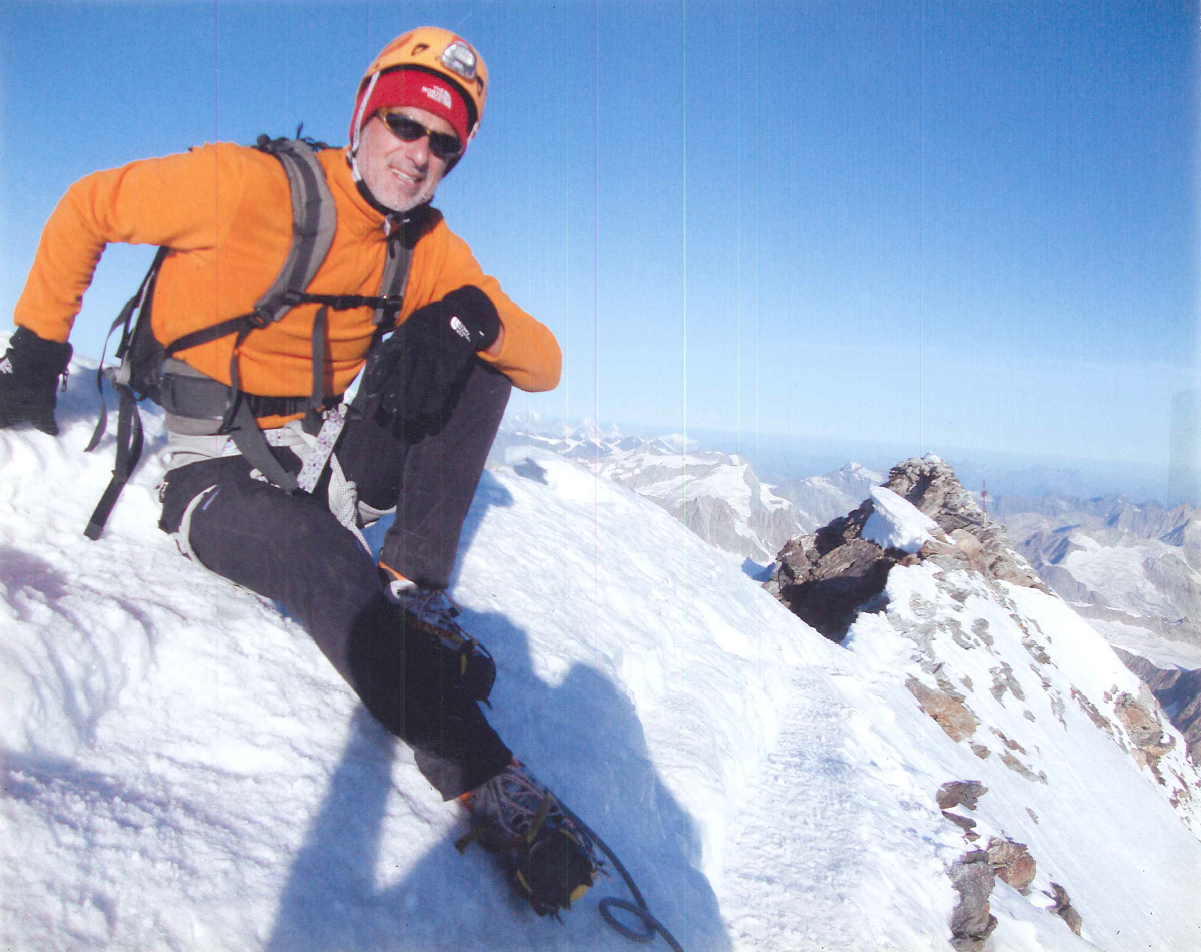 The day of our climb, the weather was perfect. Haraud and I were among the first teams to reach the summit. The climb was a ton of fun. Interestingly, the Matterhorn guides don’t believe in using ice axes when they climb. They consider ice axes a mental crutch more than a useful tool, and think they have the potential to create problems. The shoulder of the mountain was a sheet of solid ice, and at first, I felt a little naked and exposed without my ice axe. Still, we got up and down quickly and uneventfully; we were back at the hut by 9:30am. Haraud invited me to have breakfast with him, but I declined. Instead, I took the tram back down (much more pleasant than running in the dark!) to meet up with Deb and Ian, and to get back to our family vacation. My unfinished business with the Matterhorn was finally resolved. I was officially…
Fred Zalokar: Licensed to Climb.